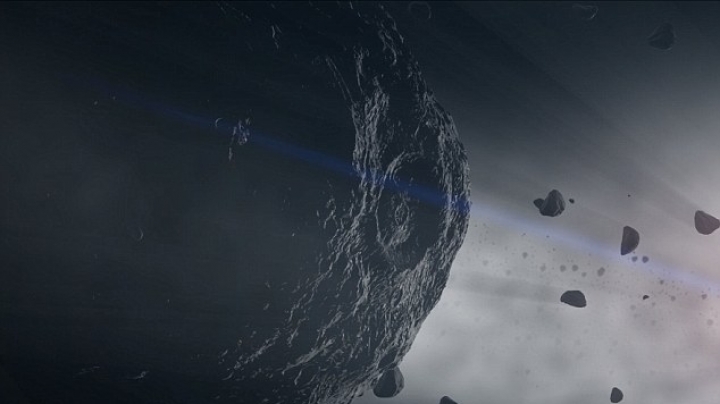 An asteroid set to narrowly miss Earth could cause 'immense suffering and death' years later if its orbit is changed when it passes dangerously near to our planet.

The space rock, called Bennu, crosses Earth's orbit once every six years and is set to pass between the moon and our planet in 2135.
Scientists are worried the 500-metre wide asteroid's orbit could be tweaked by Earth's gravity as it passes by, causing it to smash into our planet later in the century.

'That 2135 fly-by is going to tweak Bennu's orbit, potentially putting it on course for the Earth later that century,' Dante Lauretta, professor of planetary science at Arizona University, told the Sunday Times.
'It may be destined to cause immense suffering and death,' he added.
It is hard for astronomers to predict how the close run-in between Earth and the moon will affect Bennu's orbit, but Lauretta estimates that it could shift it onto a collision course with our planet.

'We estimate the chance of impact at about one in 2,700 between 2175 and 2196,' he said.
Bennu travels around the sun at an average speed of 63,000mph and an impact with the Earth would be similar to setting off 3billion tonnes of explosives.

Nasa is so concerned by Bennu that it is sending a probe to the asteroid's surface to analyse it.

The OSRIS-REx spacecraft is set to launch in September and land on the asteroid in 2018.
It will spend a year on the surface of Bennu collecting samples of rock before heading back to Earth in 2023.
If successful, the mission will be the first to visit an asteroid and return to Earth.
To capture samples on the surface, the craft will hover over a specific area and will lower itself at a painstaking 10 centimeters per second.

It will only be in contact with the surface for five seconds as it vacuums up the targeted area.
The mission will also be used to study the building blocks of life by analyzing the minerals beneath Bennu's surface, DailyMail.co.uk reports.