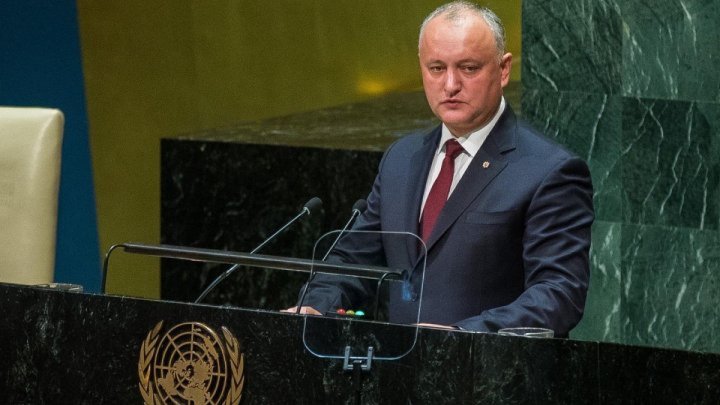 The Public Association Parliament 90 issued a statement which says that President Igor Dodon's speech at UN General Assembly points to the constitutional norm and is contrary to the Declaration of Independence.

Alexandru Arseni states that the head of state was obliged to demand the removal of Russian troops from the territory of the Republic of Moldova. However, in his speech, he justified the presence of the 14th army and blamed the soldiers who defended their homeland in 1992 on the war.

Moreover, according to the first vice-president of Association Parliament 90, Dodon premeditated this.

"It's not a mistake. You can't come to such an important forum and say such words. People were outraged. These actions were premeditated", added Alexandru Arseni.

In addition, Igor Dodon made a mistake saying that representatives of 125 ethnic groups live in Moldova and 1/3 of the population identify themselves as Russian speakers, says the Association who think this claim is illegal and ungoverned.

The members of the Association also disagree with the statement of the head of state that "Russian language has the status of inter-ethnic communication in Moldova". According to the signatories, Dodon thus denies the provisions of the Constitution.

The president has not yet commented on the allegations.

Recently, Igor Dodon delivered a speech at the United Nations General Assembly in which he praised the Russian Federation.

Prime Minister Maia Sandu said that the head of state's opinion did not reflect the Government's position and that Dodon did not have enough manhood at the event.

Last year, at the UN General Assembly, former Prime Minister Pavel Filip condemned Russia for maintaining its military forces and weapons on the territory of our country.