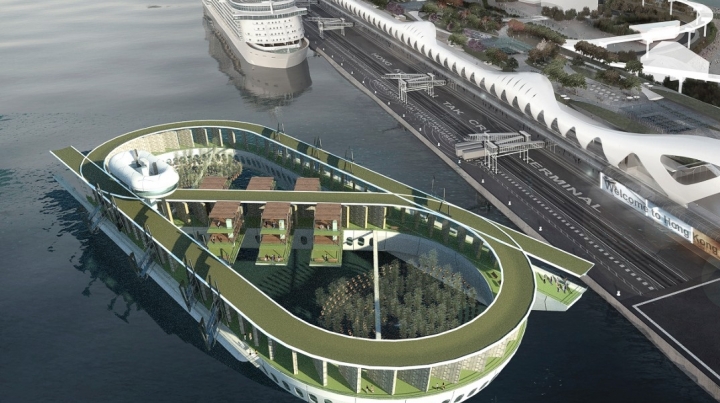 By 2050, one in every four people in Asia-Pacific will be over 60 years old, according to the United Nations.

At the same time, 188,000 people per day are flocking to urban areas, putting huge pressure on real estate.

With more people dying and less space available, architects and city planners are imagining bold and modern ways to bury the departed, which are both efficient and respectful.

From conveyor-belt columbarium to floating cemeteries and even space burials, the Asian funeral scene is undergoing an exhilarating transformation, reports CNN.

Death might be inevitable, but it doesn't have to be predictable.

Japan has seen perhaps the most dramatic changes to its burial scene.

Since the Edo period (1603-1868), inherited rural graves and, more recently, urban cemetery spots have been passed down through the generations of a family.

But the cost of keeping a burial plot has skyrocketed in recent years. Today, a spot in prestigious Aoyama Cemetery, in Tokyo, costs $100,000, while even locker-style columbarium - called nokotsudo - can fetch $12,000 at a centrally located Buddhist temple.

Furthermore, with single households in Japanese on the rise, reliance on an inherited burial site is less practical.

The Ruriden Byakurengedo columbarium, in Tokyo's famous shopping district of Shinjuku, is one high-tech alternative updated to suit modern life in Japan.

From the outside, Ruriden looks like a traditional Buddhist burial building with wooden doors and gracefully curving eaves.

But upon swiping an electronic pass card to enter, the doors swish open to unveil a dazzling display of 2,045 LED-lit Buddha statues. The relevant Buddha glows a different color, guiding each visitor to the niche that houses their loved one's remains.

Not an incense stick or memorial plaque is in sight.

A niche here costs $7,379, including maintenance, and can be used for 30 years before the remains are moved to a communal area under the building, to make way for incoming remains.

For many elderly without children, this removes the worry about maintenance of their niche, or passing it on to the next generation.

"Japan's population is declining due to a failing birthrate ... it is getting difficult to hand over the family grave to the next generation," Taijun Yajima, head priest of Kokokuji Buddhist Temple in Tokyo, which operates Ruriden, tells CNN.

"But the tradition and sentiment towards the deceased has not changed even we though use high tech solutions. This columbarium just meets the needs of the times."

The Shinjuku Rurikoin Byakurengedo, in Tokyo, looks like a spaceship and acts like a smart library for ashes.

"The building doesn't feel anything like a crematorium," says Hikaru Suzuki, author of "The Price of Death: The Funeral Industry in Contemporary Japan."

When you swipe the card, a machine automatically fetches the relevant ashes from an underground vault and transports them across a conveyor belt system to the appropriate room.

The compact building holds tens of thousands of urns, and does not require an inheritor or maintenance by a family member.

In Hong Kong, there is barely enough land for the living, let alone the dead. Burial sites, therefore, are impractical and 90% of the population opts for cremation.

But even ashes need a home, and reserving a niche in a public columbarium has become akin to winning the lottery, with thousands of families on waiting lists to secure a tiny square foot of space, according to the Food and Environmental Hygiene Department (FEHD), which oversees these facilities.

Meanwhile, a private columbarium niche can cost over $100,000.

The "Floating Eternity" is a sea-faring cemetery aimed at relieving pressure on the city's burial sites, and designed by local architectural firm Bread Studios.

"In Hong Kong, it's traditional to visit our ancestors' graves twice a year - at Ching Ming Festival, in April, and Chung Yeung Festival, in October," says Paul Mui, design director at Bread Studio. "It seems like a waste to reserve so much valuable land for places we only visit twice a year."

The Floating Eternity, if built, would offer enough columbarium space to house the ashes of 370,000 people. The design incorporates cultural details, such as a positive feng shui design and bamboo gardens.

Lingering around the back of Hong Kong Island during off-season, the boat would dock in accessible spots for Ching Ming Festival, allowing relatives onboard to take part in traditional grave-sweeping activities.

The Elysium Space service is taking off-land burials one step further, by launching ashes into orbit.

For $1,990 each, 100 families per rocket launch can send a 1-gram capsule of ashes into space. The satellite containing the capsules typically orbits the Earth for several months before blazing back into the atmosphere, like a shooting star.

"Space is not just about technology, it is a beautiful landscape that can be used to create poetic celebrations," former NASA space system engineer Thomas Civeit, the founder of Elysium Space, tells CNN.

"Narratives about our souls traveling through the stars after we pass away already exist in Japan," explains Civeit, adding that about 50% of the US-based company's customers are Japanese.

The first launch departed from Kauai, Hawaii, in 2015, with another scheduled for this year.

Families can use an app to track the orbiting satellite, and even see it with the naked eye, if wearing binoculars.