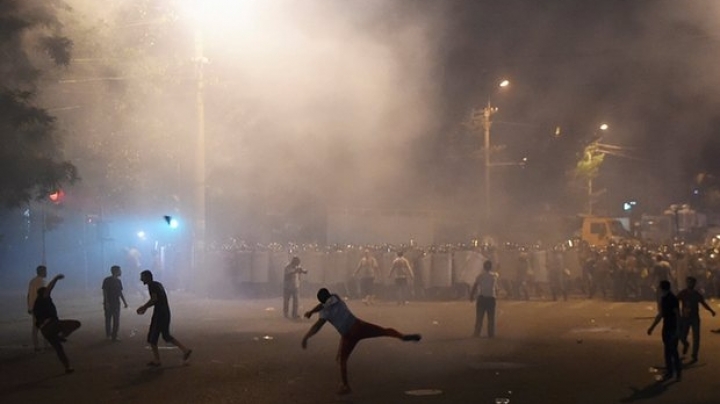 Clashes between anti-government demonstrators and police are intensifying in the Armenian capital, where armed men have been holding hostages for four days and protesters erected barricades on a nearby avenue, reports The Guardian.

More than 50 people were injured in the clashes near a police station in Yerevan after police moved in late on Wednesday night to clear out the protest camp. Authorities said 51 people have been hospitalised, 28 of them police officers, and about 30 protesters have been detained.

The police station was seized on Sunday by a group of gunmen seeking the release of an opposition figure who was arrested in June for illegal weapons possession.

Roughly a dozen men, many veterans of Armenia’s 1988-1994 war with Azerbaijan, broke into the Erebuni district’s police station with a truck, taking several policemen hostage. One policeman, Colonel Artur Vanoian, was killed in the attack and two other people were wounded.

The group, led by Pavel Manukian, a mustachioed, rifle-toting, 50-something war veteran, called for the freedom of Zhirayr Sefilian, the leader of the anti-government Founding Parliament group. Sefilian was jailed in late June for allegedly plotting a government takeover.

The group also demanded freedom for another dozen suspected political prisoners, as well as the resignation of the president, Serzh Sargsyan.

Police have since blocked the entrance to the street leading to the police station, and brought in armored vehicles, special forces and, according to reports, snipers. Negotiations with the group, who call themselves the the Daredevils, are ongoing.

On Monday, three hostages were release but police say another five are still being held.

The protesters are sympathetic to the gunmen, and are blaming the government for the standoff.