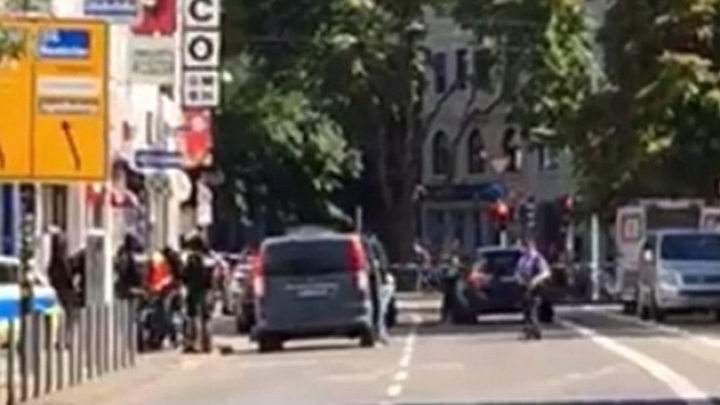 German anti-terror police are preparing to storm a building after an armed man reportedly barricaded himself inside a restaurant, reports Daily Mail.

Specially trained officers were called to a restaurant in the western German city of Saarbruecken amid reports a man covered in blood was inside.

Heavily armed police have been seen gathering outside the eatery this morning while negotiators and psychologists are attempting to make contact with him.

The German newspaper Bild sair that the man had run into the restaurant 'Dubrovnik' in the town centre and shouted that everyone should leave.

A police official said the man seemed to be psychologically disturbed and there were no indications that this was a terrorist-related incident.

He also said the man was not believed to be holding anyone hostage and police were trying to negotiate with him. It remained unclear how he injured himself.

Germany is on high alert after a series of bloody attacks in the last month.

ISIS terrorists claimed responsibility for an attack on July 18 near Wuerzburg in Bavaria in which a 17-year-old refugee believed to be from Pakistan or Afghanistan wounded five people with an axe before police shot him dead.

A 27-year-old Syrian who blew himself up in Ansbach, southern Germany on July 24 had pledged allegiance to ISIS on a video found on his mobile phone, investigators said. ISIS later claimed responsibility for the bombing, which wounded 15 people.

On July 22, a teenager went on the rampage with a gun murdering nine young people after luring them to a MacDonald's and opening fire.