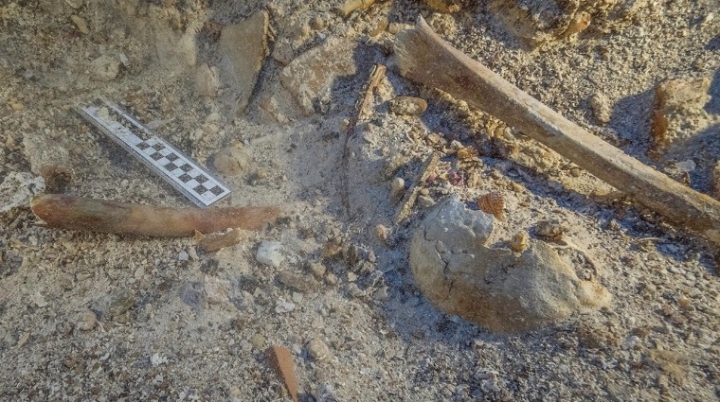 Off the coast of the isolated Mediterranean island of Antikythera in Greece lies one of the largest and most puzzling shipwrecks in history. But now the sea may finally be ready to reveal its secrets.

A team of international archaeologists from the Hellenic Ministry of Culture and the Woods Hole Oceanographic Institution (WHOI) have recovered a partial skeleton - believed to be from a male in his early 20s - from its watery gravesite about 50 meters below the surface. And researchers hope it could shed light on what caused the ship to sink off of the jagged coastline more than 2,000 years ago, reports CNN.

The excavations have yielded a partial skull, including a jaw and three teeth, two arm bones, multiple rib fragments and two femurs.

Brendan Foley, a marine archaeologist with WHOI and co-director of the expedition, says that the bones were located on August 31 during the team's second expedition of the season. Archaeologists were already jubilant following a successful exploration in May, which saw the team return with spectacular treasures that included a bronze spear, gold jewelry and glassware.

Foley affectionately refers to the remains as Pamphilos, a Greek name which translates to "friend to everyone." The moniker comes from a drinking vessel with the same name etched across the rim previously recovered by famed underwater explorer Jacques Cousteau in 1976.

With painstaking care, the team disinterred the latest skeletal remains and brought them back to the surface, where Hannes Schroeder, an expert in ancient DNA from the Natural History Museum of Denmark, had been drafted to evaluate whether there is the potential for DNA extraction.

If viable DNA does exist, Schroeder believes this could point toward some of the answers archaeologists are searching for about the mysterious voyage.

Schroeder says preliminary analysis of the teeth, which appear to be in relatively pristine condition with little wear and a robust femur bone, indicates the remains could be from a young man in around 20 years old. He adds that while the femurs, for example, are unlikely to have viable DNA, hope lies in the petrous bone - a hard section of the skull located behind the ear. He says this is the most likely area to locate DNA, if it still exists.