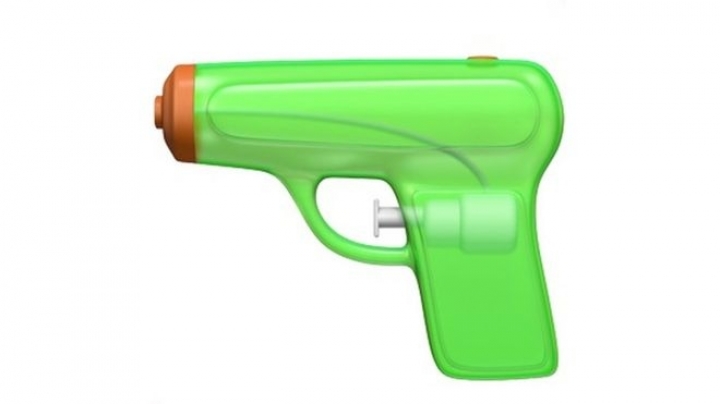 Apple has been urged to rethink its plan to convert the handgun emoji symbol into a water pistol icon, BBC reports.

The Emojipedia website argued that the symbol could still appear as a lifelike gun in messages sent to non-iOS users.
Apple made the change in the wake of a series of shootings in the US.
However, Microsoft announced this week that its toy gun symbol would be redesigned as a more realistic-looking firearm.
The emoji character system allows companies to use slightly different designs of the same basic objects, signs or expressions.

"The thing is, emojis already look different on different platforms and it does cause confusion," Jeremy Burge, editor of Emojipedia, told the BBC.

"When we're dealing with guns and toys as a comparison, that's a whole new level of problems that we have there."
In his blog, Mr Burge pointed out that someone could send a message from an iOS device mentioning a water pistol - but that this could look like they were asking the recipient to bring a real weapon if that user did not have iOS.

The water pistol emoji, along with several other new icons, is available to a few users testing iOS 10, which will be more widely available in the autumn.

Mr Burge added that he had emailed Apple about the issue but had not yet received a reply.

There was further criticism from web users, but a columnist in the Guardian praised the move as a statement on gun control.

"It's a smart, small part in the battle - which we're presently losing - to keep Americans safe," wrote Jean Hannah Edelstein.

There have been calls previously - including from a campaign called Disarm the iPhone - to remove the handgun icon from iOS devices.

While the merits of Apple's decision continued to be the subject of debate, Microsoft announced that it was converting a toy ray gun emoji into a more realistic-looking handgun.

In a blog, the company said it felt its emojis needed to feel "more human, more personal, more expressive".

The water pistol emoji, along with several other new icons, is available to a few users testing iOS 10, which will be more widely available in the autumn.

"Apple has the most prominent emoji set that people use," said Mr Burge. "I think it has a high responsibility to be a bit cautious."

He has suggested that the firm could simply hide gun emojis from the keyboard altogether, instead of redesigning them.