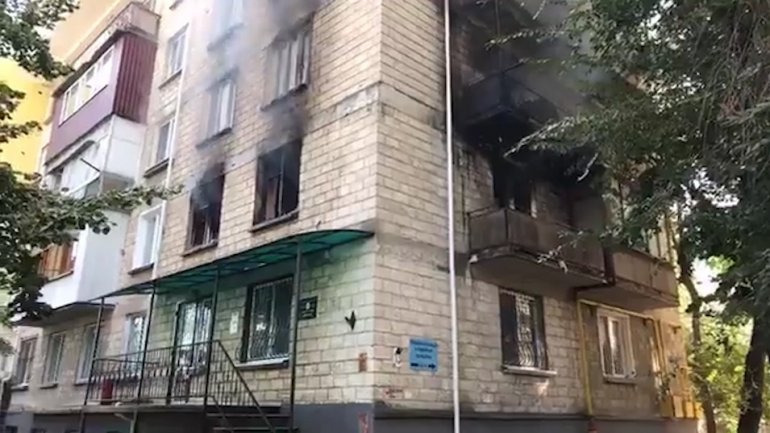 An apartment block from the Capital, Râșcani, was engulfed in flames. The firefighters had difficult time extinguishing it, due to various trash stored there by the owners, having required three teams to be dispatched to combat the fire.

The Firefighters managed to evacuate six people leaving on higher floors, while fighting the flames for over half an hour.

"There is no danger for the fire to spread and no casualties. While combating the flames, the firefighter simultaneously were performing rescue missions in order to evacuate people living on higher floors" spokesman from Emergency Situation and Civil Protection, Diana Ţuţu, said.

The fire spread on 45 square meters, fully destroying the 3rd floor and everything that was in it.

The source of fire is yet to be determined. Tough the neighbors believe it was due to the owners carelessness.

"I believe it all started from a cigarette bud, as it is not the first time for this to happen".

"It was a big fire. We could see the smoke coming from all directions".

Neighbors claim that the apartment which started the fire belongs to a woman and her son. The owner would rummage through dumpsters and carry back home the trash.

The apartment was filled to the brim with waste.

Last time the trash was taken out back in 2015, by the praetors of the Râşcani sector.

"The neighbors claim the both the woman and her son suffer from mental illness and would even cause small fires during winter in attempts to warm up" praetor of the Râşcani  sector, Nicolae Balaur declared.

The authorities tried to take out the trash from the apartment earlier this year, but the woman would not allow them.

Previously both of them were taken to a Psychiatry Clinic, but they refused to be admitted and run away.