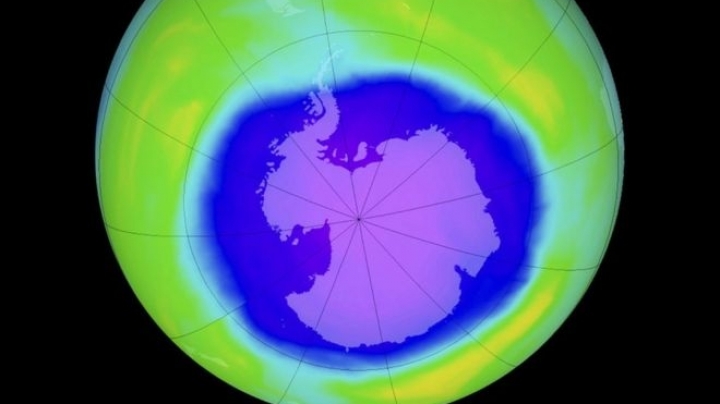 Researchers say they have found the first clear evidence that the thinning in the ozone layer above Antarctica is starting to heal, reports BBC.

The scientists said that in September 2015 the hole was around 4 million sq km smaller than it was in the year 2000 - an area roughly the size of India.

The gains have been credited to the long term phasing out of ozone-destroying chemicals. The study also sheds new light on the role of volcanoes in making the problem worse.

The natural production and destruction of ozone in the stratosphere balances itself out over long time, meaning that historically there has been a constant level to protect the Earth by blocking out harmful ultraviolet radiation from the Sun.

Its absence increases the chances of skin cancer, cataract damage, and harm to humans, animals and plants.

British scientists first noticed a dramatic thinning of ozone in the stratosphere some 10 kilometres above Antarctica in the mid 1980s.

In 1986, US researcher Susan Solomon showed that ozone was being destroyed by the presence of molecules containing chlorine and bromine that came from chlorofluorocarbons (CFCs). These gases were found in everything from hairsprays to refrigerators to air conditioning units.

The reason the thinning was occurring mainly over Antarctica was because of the extreme cold and large amounts of light. These helped produce what are termed Polar Stratospheric Clouds.

In these chilled-out clouds, the chlorine chemistry occurs that destroys the ozone.

Thanks to the global ban on the use of CFCs in the Montreal Protocol in 1987, the situation in Antarctica has been slowly improving.

Several studies have shown the declining influence of CFCs, but according to the authors this new study shows the "first fingerprints of healing" and the ozone layer is actively growing again.

Prof Solomon and colleagues, including researchers from the University of Leeds in the UK, carried out detailed measurements of the amount of ozone in the stratosphere between 2000 and 2015.

Using data from weather balloons, satellites and model simulations, they were able to show that the thinning of the layer had declined by 4 million sq km over the period. The found that more than half the shrinkage was due solely to the reduction in atmospheric chlorine.

Normally measurements are taken in October when the ozone hole is at its largest. But this team believed they would get a better picture by looking at readings taken in September, when temperatures are still low but other factors that can influence the amount of ozone, such as the weather, are less prevalent.

The scientists believe that a key contributor to the record hole was volcanic activity.

The study has been hailed as "historically significant" by some other researchers in the field.