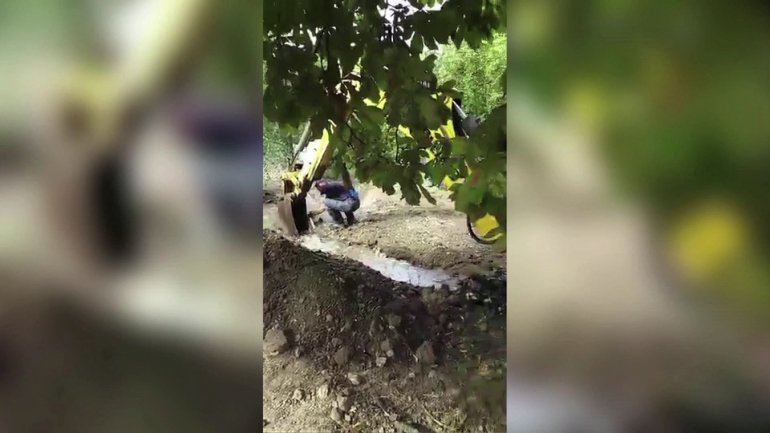 A new accident took place on Florilor 12/2 Street from the Capital around 10 AM. Due to the construction of a new building, which begun two months ago, today, while digging a water pipe was broken. Resulting with many playground being flooded and six apartment building left without water.

The nearby residence went on the streets to show their displeasure with the situation.

"While digging the workers have, by accident, hit a water pipe, creating a fountain and resulting in water being closed off."

"It was a big fountain, seemed like something exploded, the nearby blocks are now flooded because of this."

"It's very uncomfortable. I was not outside, but the neighbors said that everything was flooded."

The spokesman of the construction company claims that the incident took place, due to the water piper not being shown on the plan.

"The pipe was already cracked. By performing work nearby, the earth disturbed the old pipe and it gave out. Now we are working to eliminate the problem" spokesman of the construction company, Veaceslav Nicolaescu declared.

It took nearly two hours until the water was not turned back on in the apartments. Yet it was not enough to calm down the people. They still protest loudly regarding the construction, mentioning that it is performed near the playground and might harm children.

"The works performed nearby, in the open air."

"It's chaos here. You can hear all the equipment when its used, not to mention the dirt and dust it creates."

Residents admitted to be fighting against the project for 10 years now, they will not accept for a new 9 floor apartment block to be build here. They sued the construction company and the first hearing will take place on 11th of September. Representatives from the construction company assure us that the new apartments will start being used by the ending of next year.