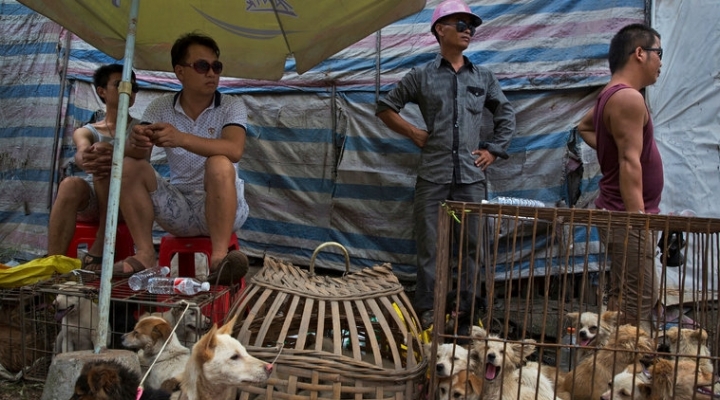 Two weeks before the annual dog meat festival in the southern Chinese city of Yulin, an international coalition of animal welfare advocates is stepping up pressure on the Chinese government to shut it down.

A petition with more than 11 million signatures was presented to the Chinese Embassy in London on Tuesday, according to Humane Society International, one of the organizations behind the campaign.

Representatives of the group, which is based in Washington, along with Chinese animal rights advocates, also delivered the petition on Friday to the Beijing office of the government of Yulin, where the Lychee and Dog Meat Festival has taken place on the summer solstice since 2010 amid mounting controversy. Copies of the petition were being sent by registered mail to Chinese health and food safetyregulators, according to Peter J. Li, aChina policy adviser to Humane Society International.

Thousands of dogs are slaughtered and served in restaurants in Yulin, in the Guangxi Zhuang Autonomous Region, for the festival, which is set to begin on June 21. Its proponents defend the practice as an expression of cultural heritage and argue that eating dogs is no different from eating cows or turkeys.

But images of dogs being beaten and gutted in Yulin marketplaces have ignited outrage around the world, as celebrities and politicians throw their support behind efforts to stop the festival. In China, where dogs are increasingly viewed as companions, not food, animal welfare advocates have raised questions about the sources of the dogs, charging that many are stolen pets.