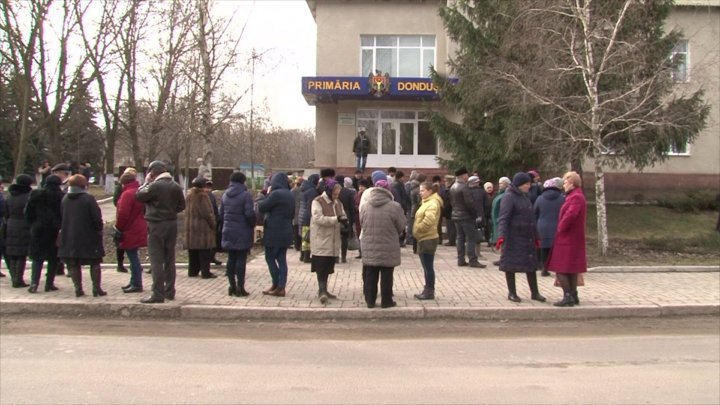 Over hundred people protested in front of Donduşeni City Hall against fee charged on waste collection. Currently, a family has to pay 30 lei per month for the service. However, since January 1 each member has to pay 15 lei instead.

People say the new taxes are quite unreasonable. They argue that the list of inhabitants hasn't been updated for years.

"I have to pay for two people although my husband died a year ago."

"Does a little child also need to pay for waste collection?"

People have identified that teach consumer pays the bill on different accounts although all payment should reach the City Hall's budget. Then they filed a petition to the District Prosecutor's Office.

The employees of the sanitation company also joined the protest.

The head of the institution claims that the city hall has not transferred payments to the company's account for several months. Debts of over 300,000 lei have accumulated and employees have been without salaries.

People went out protesting on the day the mayor had an audience program but Ivan Belciug, Partidul Nostru (Our Party) politician, was absent from work.

A local councilor appeared in front of protesters and acknowledged that the population database is not up to date.

Locals threaten new protests if the mayoralty does not review the procedure of payment.