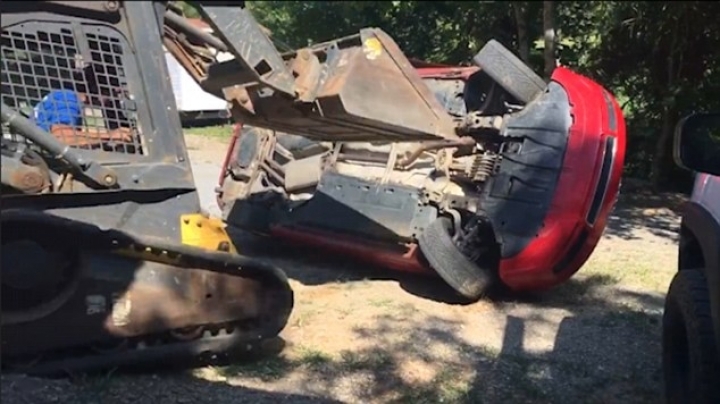 Angry dad destroys his daughter's $13,000 Audi with a digger because he caught her 'fooling around with a boy inside'

When this furious father found his young daughter with a boy in her car he freaked out and flipped up, quite literally, the £10,000 Audi A4 the two had been 'fooling around' in.

Mad dad Mike Card completely crushed the customised car with a small digger, and the whole scene was caught on camera and uploaded by his son Kaylor.

The Facebook video shows the man in his machine rolling around the red Audi rendering it totally undriveable.

It takes Mike just two minutes to destroy the vehicle in Young Harris, Georgia.
Kaylor captioned the footage: 'Yep! When a dad has to prove a point! #DADDYNOTHAPPY.'

It is not exactly clear what incensed Mike so much, but it is evident from Facebook that Ashlyn, Kaylor's sister, may have been in the car with someone 'not supposed to be there'.

Yet not everyone online has agreed with the father taking to the excavator as the best form of punishment.
Mitchell Lee wrote: 'That's crazy, that was a pretty car, unless u got money to burn.'