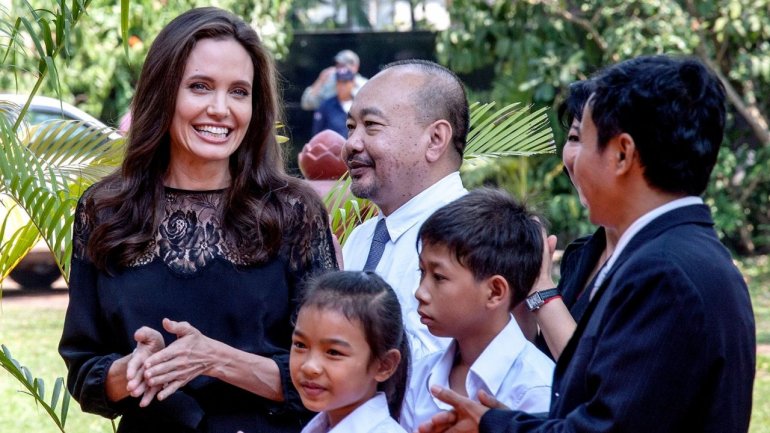 The actress was joined by her children — Maddox, 15, Pax, 13, Zahara, 11, Shiloh, 10, and twins Knox and Vivienne, 8 — at the world premiere of her passion project, First They Killed My Father in Siem Reap, Cambodia. Her sons Maddox, who was born in Cambodia, and Pax were both involved in the film’s production, according to Yahoo News.

Presented at the Terrace of the Elephant in the ancient Angkor Wat temple complex, the film was screened to both Hollywood and Cambodian royalty, as the country’s King Norodom Sihamoni and Queen Mother Norodom Monineath Sihanouk were in attendance, along with a host of senior government officials. Jolie and her family posed for a photo with the royal family at the premiere.

The premiere of First They Killed My Father, was screened in the temple of the elephant terrace, a couple of kilometers from where Jolie shot her breakout 2001 film Tomb Raider. As the heat of the day wore off, local families picnicked along the banks of a nearby lake, while monkeys scavenged the area for scraps of food.

While speaking at the premiere, Jolie referenced her deep connection to Cambodia since it is where her first child, Maddox, is from.
AFLĂ imediat Știrile Publika.MD. Intră pe Telegram