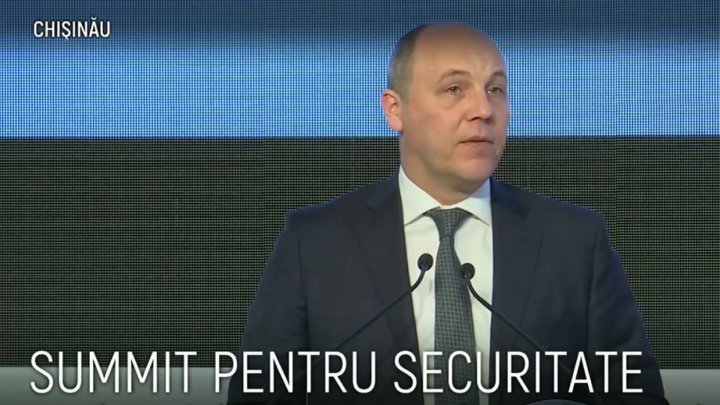 Chairman of the Verkhovna Rada, the Ukrainian parliament, Andriy Parubiy claims that Russia poses the biggest threat to his country's security.

"We have the occasion to speak of the threats that not only our region faces, but also the Euro-Atlantic space. Those problems threatens the whole world. 4 years ago Ukraine felt the full wrath and aggression of Russia, when it's army interfered in our country. We declared that Putin is a threat for the whole world and not only Ukraine. We need a joint strategy to combat Russia's aggression. Today's event is a good beginning for a regional security project, supported by European and U.S. partners" Andriy Parubiy declared.

Representatives of Parliaments, of United States Congress, Members of the European Parliament participate at the first inter-parliamentary summit on security challenges, held at Chisinau. The events is also attended by renown experts such as executive vice president at the Atlantic Council of the United States, Damon Wilson, former United States Assistant Secretary of State for Democracy, Human Rights, and Labor, David Kramer,  Chairman of the International Advisory Council at the Center for Social and Economic Research, Anders Åslund, Coordinator for the Office of Reconstruction and Stabilization, John Herbst, Ambassador Asif Chaudhry, Associate Director, Strategic Research Partnerships, and International Directo, Jonathan Eyal, Ambassador Alexander Vershbow, former Deputy Secretary-General of NATO, as well as other international and regional experts.

Full information about the event and speakers, including speaker biographies, can be found on https://parl4sec.md/en/and event pages on Facebook and Twitter.
AFLĂ imediat Știrile Publika.MD. Intră pe Telegram