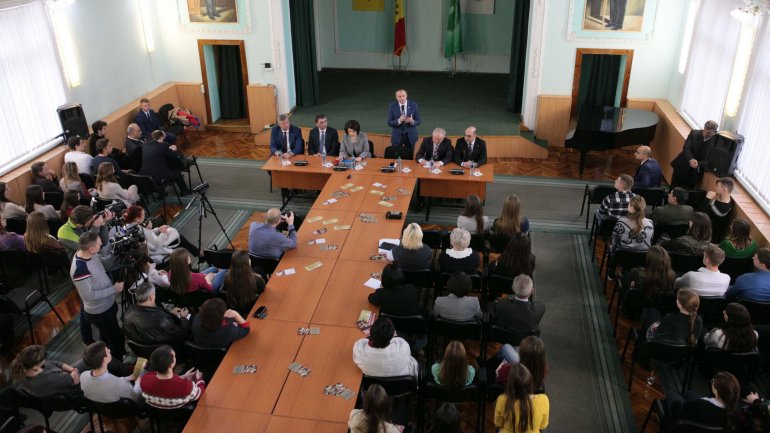 "Start participating in promoting things that care for and invest in your professional development" President of Moldovan Parliament, Andrian Candu urged students and teachers from Alecu Russo State University of Bălți.

Andrian Candu mentioned that after two years of hard work they managed to end the crisis and have finally stepped on the path of development. According to him, there are many important projects for people that will be soon implemented, but for them to be successful citizens need to participate.

Students have showed interest in the measures taken by authorities so that people will wish to return home from abroad. Andrian Candu spoke of the "First House" project, attracting investments, developing the IT domain, facilities for launching and developing a business, which in its turn will create work places. All those thing will gradually raise the living standards.

The First House project has awoken an interest and created many questions regarding the matter. President of Moldovan Parliament confirmed that the project will be approved by the end of the year, while details will be discussed in public debates organized by authorities. According to him, the project will be ready to use since the beginning of next year.

Andrian Candu, along with Minister of Education, Culture and Research, Monica Babuc, have spoken of reforms that take place in the education, meant to create competition and fit the requirements from the market, as well as create opportunities. At the same time, the official has announced that four best students from Alecu Russo State University of Bălți will receive President of the Parliament's scholarship.

President of Moldovan Parliament went to Bălți, with Vice-President Vladimir Vitiuc. According to the program, the Parliament's leaders will hold today meeting with entrepreneurs from the North and discuss with local press.