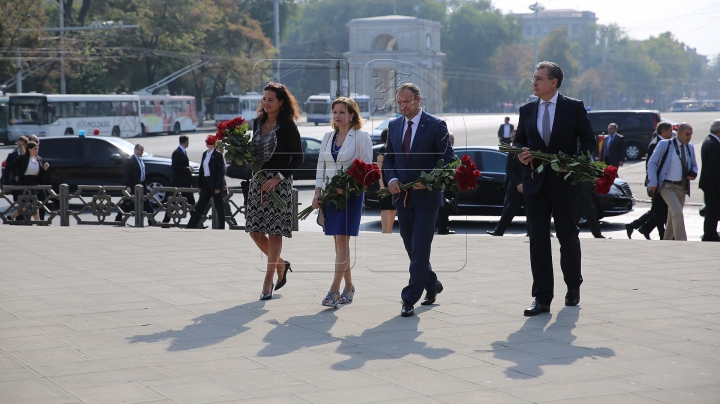 The Parliament has marked today 25 years of independence of Moldova through a festive program with the participation of important European parliamentary delegations.

The official ceremony dedicated to the 25th anniversary of the independence of Moldova took place at the Palace of Republic. At the festivity attended approximately 300 guests, including the authorities from Moldova, former and present deputies, ministers, ambassadors, representatives of development partners, of civil society and the academic environment, persons of culture.

The Parliament speaker Andrian Candu has mentioned in his speech that at 25 years from the proclamation of independence Moldova has many challenges ahead, but also many opportunities, the main objective being the advance of the European integration process in country’s economic development.

“The 25 years weren’t always how we wanted, being marked by many changes which took place too suddenly and to which we did not always know how to answer firmly and with dignity, how the promoters of the fight for independence. Each stage had its problems, but also achievements, all of them being part of a tough road which we passed towards the democratic adulthood of our country. The most important is the fact that today Moldova has a country project – integration in the European Union” declared the President of Parliament.

According to the speaker, the objective of European integration of the country should unify the citizens of Moldova, so that our country could get as fast as possible in the European family, and the nation should live better here. Andrian Candu has reaffirmed the commitment of the parliamentary majority and of Government to change the conventional approach of the reforms and to advance in the implementation of priority reforms.

“In spite of all hardships, I sincerely believe that the stability and unity are best answers if we want to have a strong, prosperous and equitable state, capable of facing both internal and external challenges. In the first 6 months of 2016 we have adopted a considerable volume of legislation centered on the strategic and durable consolidation of some important fields, and in this parliamentary session we want to ensure that the reforms are implemented not only on paper. In the following months, our efforts will be concentrated on the parliamentary control and the assessment of priority laws adopted by the Parliament. No matter the speculations, the progress registered by this majority will be appreciated by citizens and not the political forces” has mentioned Andrian Candu.

The president of the Parliament has advised the youngsters and civil society to get involved more actively in the public life, in order to generate changes in the country, intended to change from the roots the outdated systems and to rule out the negative phenomena which are wearing out the country. In the context of the elections which will take place at the end of October 2016, the speaker has gave advice to parties and political leaders to learn from the experience of previous years, stressing out the fact that no position justifies the abandonment of the national interest.

Also, Andrian Candu gave an homage to the deputies from the first Parliament and to all heroes of the Emancipation and National Rebirth Movement, which fought for sovereignty, Romanian language and independence of Moldova.

In his turn, the euro-parliamentarian Andi Cristea, the co-president of the Parliamentary Committee of the Association Moldova-EU, has declared that Moldova is the only country from the eastern neighborhood of the EU that signed the association agreement with the EU and benefiting of the liberalization of the visa regime.

“Not many from Europe confronted tougher problems that Moldova, so you have all reasons to watch proudly all what you did in the last 25 years. Engaged in reforms speeding up the implementation of the association agreement put into force in July, I have the faith that Moldova can provide in the following years the best argument and impulse for a robust policy of the expansion and open doors. Moldova may contribute to the way how the changes in Europe will look” said Andi Cristea.

The euro-parliamentarian has encouraged the authorities to keep up the same way regarding the European integration.

“The progresses and the authenticity of the pro-European engagement are seen in Brussels and other capitals of the European Union. Things are not perfect and I affirm with realism that they cannot be perfect in a young democracy, which is in the process of consolidation. The political will and the continuity of the process is essential. Moldova may become the successful story of a new wave of European integration” said Andi Cristea.

The president of the National Council of Federal Assembly of Swiss Confederation, Christa Markwalder has congratulated our country with 25 years of independence.

“At 25 years, Moldova is a very young democracy. The country has to pass over many obstacles, but is also registered many successes, fact I am glad of and I congratulate you. I am happy that Switzerland can help Moldova to register some progresses, and some joint projects are successful” declared the Swiss speaker.

The president of Constitutional Court, Alexandru Tanase, and the deputy in the first Parliament, Mihail Cotorobai, National Lawyer have addressed congratulatory messages to Moldovan citizens for 25 years of independence.

“After 25 years of independence, they do not want to triumph, and all we have a part of the guilt, it is the problem of our elite. Only taking of political systems adequate to the time will allow to discuss about the future of this state” declared Alexandru Tanase.

“The most prosperous nations have reached a high degree of freedom and well-being, respecting its nation and putting the value of human dignity higher than everything. It guarantees freedom and decent living conditions to all residents, manifesting the belief that the state is not inevitable to the good of citizens, but is may intervene beneficially in their favor” mentioned Mihail Cotorobai.

At the ceremonies organized by the Parliament, dedicated to the 25th anniversary of the independence of Moldova have participated presidents, deputy presidents and deputies of the parliaments of 11 countries – Ukraine, Belgium, Poland, Switzerland, Romania, Bulgaria, Latvia, Lithuania, Serbia, Turkey, and Albany, and His Royal Highness Principle Radu of Romania.

The program has started in the morning with the traditional flowers to the monument of Stephen the Great.

In the same context, at the Palace of Republic was organized the exhibition of pictures and documentary materials “25 years of independence”.