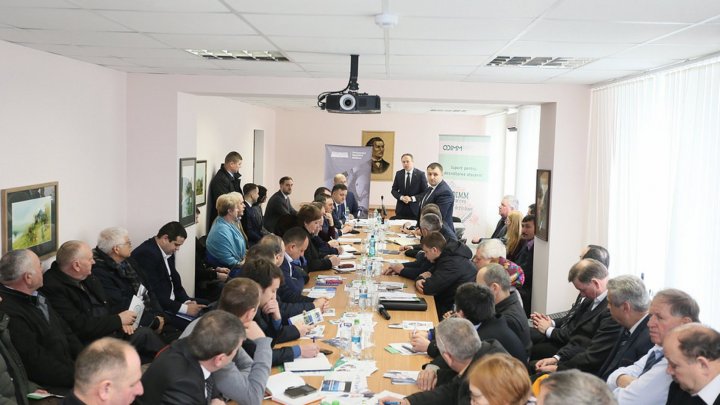 President of Moldovan Parliament, Andrian Candu spoke of created opportunities within the business environment with entrepreneurs from Nisporeni, Ungheni and Strășeni.

Andrian Candu presented to the business environment the over 20 programs, financed by the state budget, as well as foreign resources. At the same time, the official spoke with entrepreneurs of the implementation of PARE 1+1, credit guarantee fund, state subventions for the creation of new jobs. The issue of employment was also addressed, as well as actions taken to stimulate, create and keep professionals in Moldova. For this, were analyzed the projects for dual education, meal tickets and the First House Program.

Andrian Candu also spoke with businessmen about the first effects of the reforms, through which the state wished to eliminate excessive bureaucracy. Entrepreneurs have empathized the advantages and saved time and money, after over 60% of the documents required for a permit were removed. Businessmen greeted the optimization of control institutions, simplifying the processes and reducing controls. Therefore, the subject of the single window implementation was approached, as well as reducing the number of reports for salaries, tax and insurance form 5 to 1.

The talks were attended by entrepreneurs from Nisporeni and nearby settlements, representatives of local authorities, Ministry of Economy and Infrastructure,  Agency of Intervention and Payments for Agriculture, Organization for Small and Medium Enterprises Sector Development (ODIMM), other governmental agencies. Officials answered to the businessmen's questions and will come up with solutions to solve each identifies issue in the near future.

PUBLIKA.MD reminds that while implementing Deep and Comprehensive Free Trade Area, European Union became the main external economic partner of Republic of Moldova. The export to European Union having risen to 65.7% in 11 months last year, compared to 46.8% in 2013. Local companies were able to benefit from financing programs worth over 90 million Euro, loans and grants. Hearings are organized at the Parliament to identify the positive and negative aspects of Deep and Comprehensive Free Trade Area implementation in Republic of Moldova from the local businessmen's point of view.