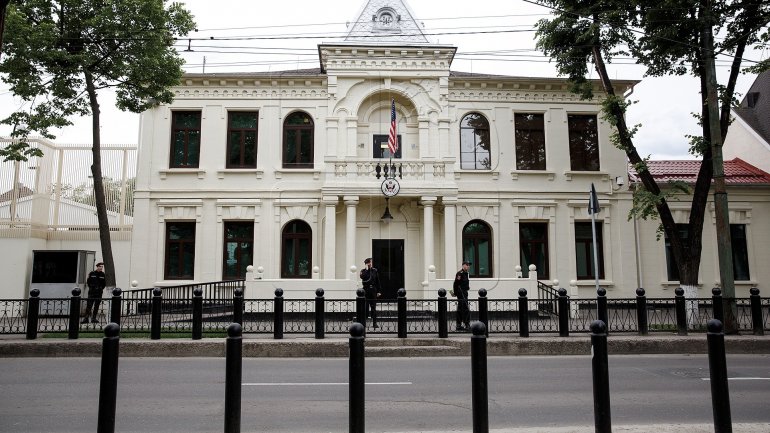 From early morning people have begun bringing flowers to the U.S. Embassy in Moldova, to commemorate the victims from 9/11 terrorist attack.

Among the visitor was the President of the Parliament, Andrian Candu.

"Today, we all remember the events that unfortunately took place in the United States of America and made everyone realize that the threat of terrorist is a real one. After the Twin Tower attack, where many people have spend their last moments, we can say that the whole world started fighting against terrorism. Through those actions, the Republic of Moldova wishes to show that it is with the USA, we still remember and mourn those who have fallen there. We appreciate everything the United States has done for Moldova, including in terms of security and fight against terrorism", Andrian Candu declared.

In his turn, the United States Ambassador to Moldova, James Pettit, stated that the fight against terrorist is an ongoing one and the whole world needs to join forces against it, including the Republic of Moldova.

"It is a sad day for the USA, we still mourn those who have deceased. Unfortunately, our country is at was. One that I fear, has no end. Therefore it is an honor, when a high ranking official, such as Andrian Candu, shows his respect. It is very important that all our allies unite in this fight, including the Republic of Moldova", James Pettit said.

PUBLIKA.MD reminds that is has been 16 years since the attack on the Twin Tower from New York, but also one wing of Pentagon, one of the most well secured places in the world. The attacks of Al-Qaida group have begun a war against terrorism, one that continues till nowadays.

Millions of Americans mourn the victims of 11 September 2001 attack. The day when terrorists tried to crush the United States.

The death of nearly three thousand citizens, from the Twin Tower attack, has changed the course of history.

Today on the spot where World Trade Center used to be, people will gather for a commemoration ceremony and a moment of silence for those who have passed away.

Even Washington today mourned, because 16 year ago, a plane filled with passengers has hit the Pentagon building. In its place was built a monument commemorating the victims.

The moment of silence will take place at 8:46 AM, the time, when 16 years ago the North Tower of World Trade Center was hit by a plane.

The plane, overtaken by terrorists, was going at 790 km/h and collided with the building, destroying 6 floors.

The massacre was caused by Al-Qaida terrorist group, lead by Osama bin Laden. Its leaders were captured and killed only ten years after, in 2011.