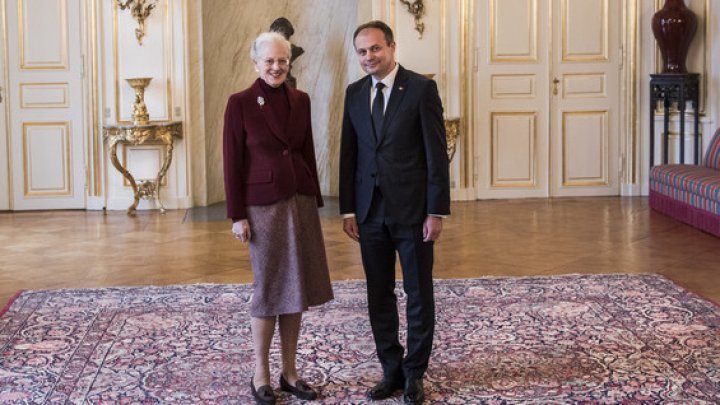 Andrian Candu, Speaker of Parliament, met today with His Majesty Margarita II of Denmark at the royal residence of the Amalienborg Palace. According to the constitution, Queen Margareta is also the head of state.

The Queen was interested in the developments in Moldova and encouraged the authorities to continue the reforms for the benefit of the citizens. The President of Parliament subsequently followed the change of guard at the Amalienborg Palace, considered one of the brightest ceremonies and one of the main attractions of Copenhagen.

Also today, Andrian Candu had a meeting with representatives of parliamentary committees, including Mogens Lyk, the Politics and Foreign Affairs Committee. At the meeting with Magni Arge, the Chair of the Faroe Islands Commission and its members discussed the functioning of autonomies, local power and delicate balance. It is worth mentioning that although they are citizens of Denmark, the inhabitants of the Faroe Islands are not EU citizens and do not benefit from commercial facilities in relation to the EU-Danish area. At the same time, Faroe Island is part of NATO, along with Denmark.

Andrian Candu talked about new projects and opportunities to extend collaboration between both countries at the Danish Prime Minister's Office.

"Our goal is to implement our commitments with the signing of the Association Agreement with the European Union. The most challenging are not just money, but first of all expertise and experience, "said the Speaker of Parliament.

He referred to the integrity legislation, the internal political situation, as well as the security risks to which the Republic of Moldova is subjected, and the actions taken by the authorities to protect citizens.

The President of Parliament makes an official visit to the Kingdom of Denmark on 21-24 January this year.