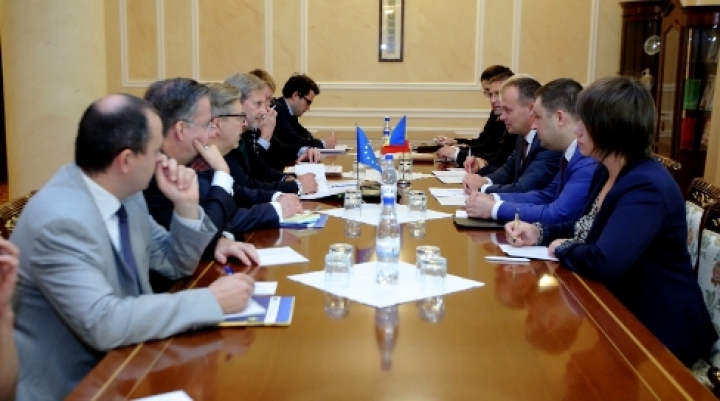 Parliament President Andrian Candu has met with EU Commissioner for European Neighbourhood Policy and Enlargement Negotiations, Johannes Hahn, on a trip to Moldova.

Andrian Candu has said the Roadmap on the priority reforms has been an efficient tool for mobilization and interinstitutional cooperation, contributing to timing the agendas of the Parliament and Government.

The speaker has spoken about the priorities resulting from the implementation of the Association Agreement, pointing out inking a program with the IMF, passing the financial-banking package and the bills related to the power sector.

”This year we have passed a series of legislative packages related to the reform of the judiciary and fighting corruption. Now they are to be fairly applied, as the Parliament will check up and evaluate their being implemented,” the Parliament President maintained.

According to Candu, the Parliament and the Cabinet will hold a joint sitting earlier in October to revise the actions to be implemented in conformity with the European integration agenda.

Johannes Hahn has reiterated the EU’s firm determination to back up Moldova’s concrete efforts of European integration, encouraging the unfolding of the reforms. He has greeted the fulfilment of the commitments from the Roadmap and urged the authorities to implement them punctually.

”Important is focusing on the sector commitments from the Roadmap. The EU expects more concrete results from Moldova for its citizens to feel the effects of such efforts,” the commissioner said.

Other issues broached refer to exporting Moldovan goods to the EU and the development of power interconnection.

The officials exchanged views as to the dialogue with the Transnistrian region and Gagauz autonomy and to the electoral context.