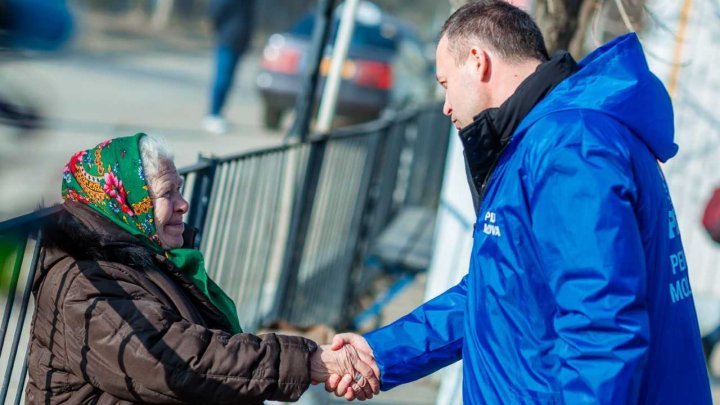 The re-calculation of the retirement pension for those who continue to work after retirement is to be reduced. This was announced by Andrian Candu, Parliament Speaker, discussing with the inhabitants of Calarasi district, where came DPM Election Caravan on Wednesday.

Asked by a retired woman whether the DPM is considering reducing the 15 years period needed to recalculate the pension, Andrian Candu said that the term was a first step. Thus, working pensioners have created the opportunity to request recalculation and the establishment of a higher pension.

"We review the possibility of recalculating pensions every five years. Meanwhile, after the December increase, we are following indexing in April and returning to the end of the year with a new increase in pensions. We are consistent in our desire to ensure a decent life for all Moldovan", explained the Democrat.

In Calarasi Andrian Candu discussed with several patients, who benefited from compensated medicines from the state. The Democratic leader told them that DPM would be just as consistent in improving the treatment and medical conditions of citizens.

"Thousands of people in Moldova have already received free treatment: compensated medicines, 15 thousand people treated free of hepatitis, 30 thousand people benefited from free investigations. What will we do? We will ensure that there is at least one doctor in every village, we will continue with subsidies for studies and for the young doctors going to the village, several services covered by the insurance policy. We will modernize the hospital network, 170 new ambulances, free dental services for children and retirees, removal of waiting lists for eye crystals, prostheses, treatments for cataract, knee, elbow, etc.", said Andrian Candu.

In Calarasi, the DPM team, joined by the party candidate for the district no.15 Nicolae Ciubuc, visited the "Hegemon" bakery.

The management of the bakery plant has shown that the enterprise has developed thanks to strong state support, about 40% of the total investment from subsidies. More than 100 jobs were created here, and as a result of last year's tax reform, by reducing taxes and social payments, the salary increase was possible at the enterprise.

DPM candidate for the constituency no.15, Nicolae Ciubuc, the Minister of Agriculture, Regional Development and Environment, mentioned that this enterprise can be considered a model for the district, but also for the whole country.

"Because of such investments are created new places of work, good salaries are paid here in Calarasi. At the same time, such investment objects increase the development potential of the locality. Here, for example, the road to the Bakery Plant is to be repaired, a road that has not benefited from investments for more than 30 years", said Nicolae Ciubuc.

"We will continue to strike a balance in state policies to protect consumers, bread to remain a social product, and business people to grow", added Andrian Candu, Parliament speaker.