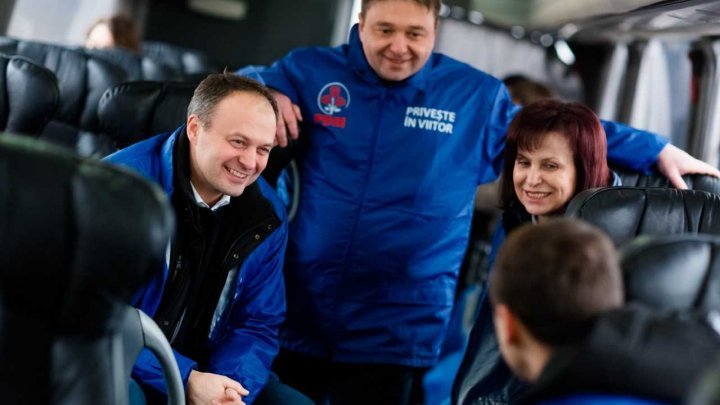 The number of recipients of compensated and free medicines increased significantly, declared the Parliament Speaker, PDM Deputy Chairman Andrian Candu in the meetings with the inhabitants of Cahul on Saturday. The PDM team at Cahul was accompanied by Elena Bacalu and Oleg Creciun, candidates for the constituencies no. 42 and 43 of the Cahul and Cantemir districts.

Andrian Candu noted increasing recipients proves that people are well informed about the social projects of the Democrat Party.

"People know they have the right to compensated medicines and they exercise this right. We will continue to ensure that all patients are treated with respect and care""Andrian Candu told Cahul residents.

He pointed out that better access to medicines is a success of government and assured that - as long as the PDM is in government - good projects for people will continue.

A resident of Cahul asked what government did to keep young people at home. Andrian Candu stressed that only in 2018, thanks to the First House program, 1200 families purchased houses, so they will remain in the country.

"1200 families bought houses last year. We want 2500 families will have those chances. It's the big effort undeniably. 60 thousand jobs were created in 2018 which also supported the young people. We came with real measure to help them find place here, in the country. Of course, we can't repair what had happened in the past 20 years but we will continue with the same measures to motivate Moldovans to return to the country", Andrian Candu explained.

In Cahul, Andrian Candu and Elena Bacalu went to the agricultural market where they talked to both sellers and buyers.

Elena Bacalu stressed that it is very useful for those representing the people in the constituency to discuss with them openly their problems, to listen their wishes and demands for the future deputies.

Arriving at Cantemir, the Democrats talked with businessmen. Andrian Candu spoke about PDM's efforts to make order in the country's finances - tax, customs and other institutions as well as on measures to support business.

"In Cantemir, in the past few years, 10 kindergartens were repaired, 67 km of aqueduct were built, 33 km of roads were rehabilitated. They are works implemented thanks to additional financial resources were found", said Andrian Candu, who also discussed with economic agents about future projects to support the economy.