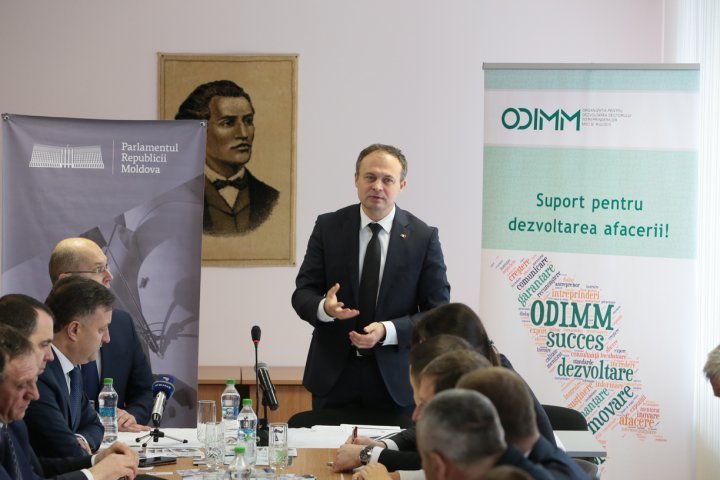 Farmers will benefit unique tax in agriculture from 2019. Pilot project on this will be the first step to be realized. The announcement was made by Parliament President, Andrian Candu who started a series of meetings with economic agents for evaluating the implementation of the EU Free Trade Agreement.

The first meeting was attended by entrepreneurs from Nisporeni, Ungheni and Străşeni.

"We would like all economic agents to pay taxes equally. It's not right that a company pays tax while another does not. If we were to elaborate unique tax, we would solve many problems", said Ion Chilianu.

"Maybe we'll have another type of tax from 2019 January, we'll pilot the project as we did in 2001, 2002 for the southern area", said Andrian Candu, the Speaker of Parliament.

The farmers also addressed the problems they face in the EU. They say carriers do not want to take orders for small distances, such as Romania or Poland.

"The problem is still with the big trucks. We have the European railway in Ungheni, we used to use it once," said Nicanor Buzovoi, president of the Association of Grain Producers of the Republic of Moldova.

The Ministry of Economy and Infrastructure assures that large investments will be made soon in the modernization of the railways. The institution also said that the European Commission is willing to help Moldova introduce export quotas for new products.

"We have to continue to work to expand the range of products we export such as products of animal, to increase agricultural products such as plums, table grapes," said Vitalie Iurcu, Secretary of State of the Ministry of Economy.

In the coming months, the head of the legislature will go through several districts to discuss the problems faced by entrepreneurs and to see how the Free Trade Agreement with the European Union is implemented.

The document was initialed in 2014, and since then local businesses have benefited from funding programs of over € 90 million.
AFLĂ imediat Știrile Publika.MD. Intră pe Telegram