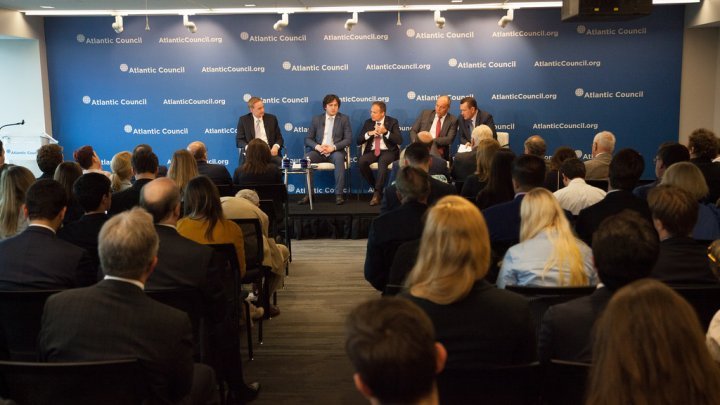 It takes time to build institutions and rule of law, now the reforms begin bring about changes. We don't request unconditional support, we want more for more approaches, remembering we are on the first line, if we fail, other states are in dangers. These are declarations of Andrian Candu, Parliament President of Moldova at a public debate organized by the Atlantic Council for Presidents Parliaments from Moldova, Georgia and Ukraine.

According to Andrian Candu, some EU politicians might be tired of the Eastern Partnership, but "we insist on the sake of the younger generations who want to live in a free world. Because of regulatory shortcomings, we are facing major tensions in the capital elections at this time, but it is important for our partners to remain committed and to support us, because things do not change overnight and society is still split. "

The Parliament President said that in situation from Chisinau, we don't talk about the court's decision and we do not criticize the judges who followed the law if we want to build a state of law. Legislation prohibits electoral agitation on the day of silence, we will set up a commission in Parliament to examine the possibility of eliminating gaps in legislation that lead to disproportionate decisions in relation to the actions of electoral actors. Perhaps it would be the case to take the experience of other states, including the US, to avoid similar situations in the parliamentary elections, "Andrian Candu said.

Asked to comment on the decision to create this interparliamentary regional security co-operation bloc, the Speaker of Parliament said there are two major goals for the three countries.

The first concerns the good implementation of Association Agreements with the EU, involving difficult reforms and similar aspirations related to European integration. The second - are the challenges from the outside.

"We have occupied territories, and Moldova has been fighting this issue since 1992 and has learned a lot in the meantime. Propaganda, hybrid warfare, false news as well as energy security, implicitly the Nord Stream 2 project, a project and subject used by the Russian Federation as a weapon against our region. We can exchange experiences, lessons learned and share knowledge, thus helping each other. Three voices, three countries with the same message, the same goals are stronger than each one. I thank the US for understanding our region, our reality and support, "said Andrian Candu.

Andrian Candu, Parliament Speaker, together with his counterparts in Georgia and Ukraine, is making a trilateral visit to the US for the first time in order to demand full and active commitment to security and reform in the region from 25 June to 1 July.