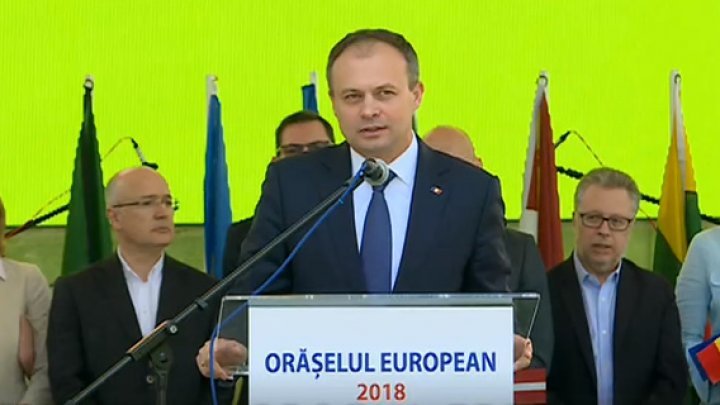 The official opening of the European Town, organized by the EU Delegation in the Republic of Moldova, took place in the Stefan cel Mare Park in the capital, where Andrian Candu, Speaker of the Parliament, presented.

"For several years already, the EU Delegation and the EU Member States are organizing a beautiful event every year on the day of Europe through this beautiful European City through which citizens of the Republic of Moldova and the inhabitants of Chisinau can see, feel, hear what each Member State EU, how different the EU states are from taste, sense and vision, and at the same time how united they are based on rules and values.

This grandiose EU project is probably the best development model in the world. For decades, the European Union has grown, developed and today has become the second market in the world, and by power and value.

To such a model we want the Republic of Moldova to aim, for four years Moldova has signed the ascetic and the free trade agreement. Our citizens move to the EU without visas and can see what the European Union means. Every day Moldova is getting closer to the EU, day by day with work and patience we are joining the EU, even if at this time we are only an EU-associated state.

I thank the EU countries for their confidence and the support they give to the Republic of Moldova to get closer to the big family of the EU. We thank all those who have contributed to the organization of such a beautiful event and I hope that this tradition when republica Mova will become a member of the European Union, and because today is Eurovision to hold our fists for the team that represents our country, who knows how we can win this year Eurovision, "said Andrian Candu, Parliament Speaker.

Thus for two days during the event, visitors will know more about the culture and cuisine of European countries at the tents installed by embassies in the Central Park.
AFLĂ imediat Știrile Publika.MD. Intră pe Telegram