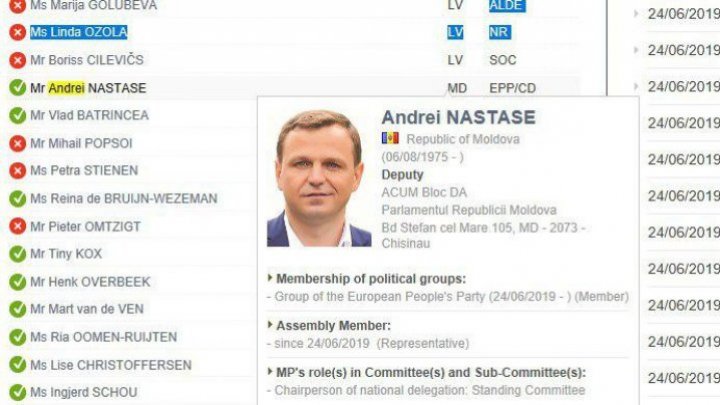 Andrei Năstase voted alongside Socialist Batrîncea for the return of Russia to the Parliamentary Assembly of the Council of Europe. Mihail Popșoi voted against.

Andrei Năstase and Socialist MP Vlad Batrîncea voted in support of the Russian Federation’s reinstatement in the Parliamentary Assembly of the Council of Europe (PACE). Russia was stripped of its voting rights in PACE as a result of the aggression against Ukraine and the occupation of Crimea.

The Parliamentary Assembly of the Council of Europe (PACE) voted, on the night between Monday and Tuesday, June 24-25, a resolution that allows Russia to return to the human rights body, five years after Moscow representatives were excluded from the voting process, following the occupation of Crimea.

After four hours of heated debates, followed by nearly five hours of voting on the amendments, 118 MPs representing Council of Europe member states finally agreed that Russia can send its delegation to PACE starting Tuesday.

This vote should allow Russia to attend the election of the General-Secretary of the pan-European human rights organization on Wednesday.

A total of 62 MPs voted against, and 10 abstained from the voting process.

Penalized for the annexation of the Crimean Peninsula, the Russian delegation to the PACE was deprived of the right to vote in 2014. Moscow reacted by boycotting PACE, then in 2017, ceased to pay its annual contribution to the Council of Europe budget.

Wanting to assure that it will no longer be sanctioned, Russia threatened to simply leave the organization, which would have been a premiere and would have deprived Russian citizens of the possibility of appealing to the European Court of Human Rights (ECHR), judicial body of the Council of Europe.

An extreme situation that most states wanted to avoid, even if countries such as Ukraine, supported by the Baltic States and the UK, believe that the reopening of CoE’s gates to Russia was comparable to a first opening of the sanctions the West imposed on Moscow for the annexation of the Crimean Peninsula.

The text adopted exceptionally allows a State to present its delegation during the year and excludes the possibility of depriving it of its main voting rights.

Ukraine's Foreign Ministry (MFA) said the return of the Russian Federation to PACE will weaken the organization and undermine its norms.