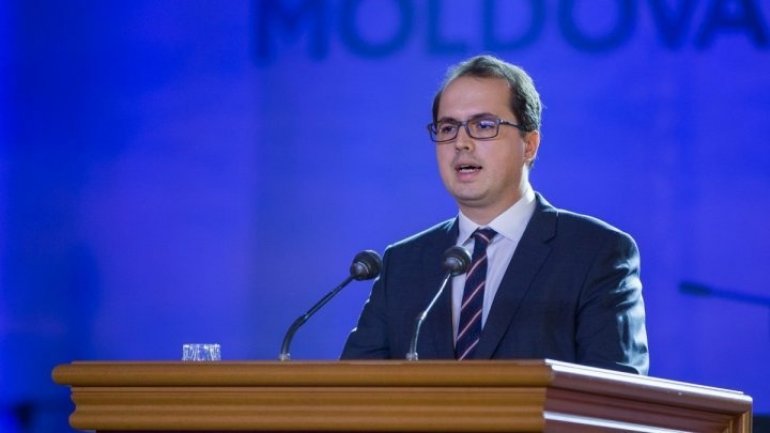 Co-president of the EU-Moldova Parliamentary Association Committee, Andi Cristea believes the Eastern Partnership Summit, which takes place on 24 - 25 November in Brussels, to be a good opportunity for European Union to transmit a political message for all partner states. In an exclusive interview for TVR MOLDOVA, the official has underlined the progresses from Republic of Moldova, Ukraine and Georgia, should influence the future programs from the Eastern Partnership.

TVR MOLDOVA - Mr. Cristea, we are in the period between the Moldova-EU Association Committee and the Eastern Partnership Summit. How would you describe the relations between Chisinau and Brussels, which one did have more crisis period in the past years?

Andi Cristea: I would say this's a period of pragmatism and results. Since coming to power, the Filip government's understood that the relationship with Brussels should base on the reform pace, the speed of implementing the Association Agreement. This's a conditional relation which works for mutual benefits.

Many reforms have been adopted and implemented over the past two years which result in economic growth and the fact that more and more citizens are favoring the West, the EU.

Some temptation to use government's relationship with the European institutions in the internal political war has been seen in adoption of mixed electoral system.

I reject these approaches and I think we need stable criteria such as documents signed with Moldova, precisely to evolve and to assess progress.

It's very good that the Government knows to focus on fulfilling conditions in order to benefit financial assistance offered by EU. I think Moldova's going on good way and should keep so, it's important, writes radiochisinau.md

TVR MOLDOVA - Has Chisinau managed to convince the European partners to continue trusting the authorities here?

Andi Cristea: Every week we have political contacts, technical discussions to overcome the barriers around the Association Agreement. A European Commissioner was in Chisinau just two weeks ago. The trust's built every day, delivering the results and engagement in dialogue. There's no reason to doubt the government. However, we still need to work hard on implementation quality. We've seen the IMF release after the recent evaluation mission in the Republic of Moldova, moreover, the good economic prospects, the pace of implementation of economic and banking reforms is praised. Let's be optimistic!

TVR MOLDOVA - The EU announced they considered providing additional support to Georgia, Ukraine and the Republic of Moldova. Do we understand that European Union also keep the same speed while implementing projects for Eastern Partnership?

Andi Cristea: The difference between the associated countries and those who don't have integration prospect is natural and based on different options that countries have made.

It is absolutely normal and essential for the European Union to focus on the relationship with the Republic of Moldova, Ukraine and Georgia, as Eastern Partnership's objectives are to ensure a neighborhood in countries where stable and economic growth exists.

These countries were involved in complex and difficult process of aligning legislation and institutional practices with things in EU member states.

The Eastern Partnership needs to be adapted, we need to learn from the mistakes and success to come up with projects allowing to make progress in three states.

I repeat, the distinctions are not arbitrary, but they are related to the free options of each state involved in the Eastern Partnership.

TVR MOLDOVA - Should the three Eastern Partner Associations have a common agenda for the relationship with Brussels or build each of their own agendas according to local realities?

Andi Cristea: Always a mix of the two approaches is necessary. I read the joint position paper that Georgia, Ukraine and the Republic of Moldova prepared for the Eastern Partnership Summit in Brussels. We have appreciated the way in which the three countries come up with concrete proposals to improve cooperation with the European Union. There are measures on better cooperation in education, on the development of regional transport infrastructure, on digitization and on security challenges. We find that the three countries have done their preparation. It is good to work together to turn the Eastern Partnership into a more efficient resource for development and integration. Of course, no one should just sit down and wait for lucks, because the reform yard is huge and there is still much to be done.

TVR MOLDOVA - There were voices burying the Eastern Partnership project. Is it a viable project or a rather degrading project in your opinion?

Andi Cristea: I believe in the objectives of the Eastern Partnership but after years of implementation I think it is time to look at what works and what is less useful. There are lessons to learn and transform into political decisions.

I think we can implement better the programs which aim for countries moving towards our Union values.

We can not relax, we must continually innovate, and I want to see the Brussels Summit a clear vision from the Commission about the future of the Eastern Partnership in terms of the mechanisms we use to join the associated countries. I also want to see the Commission and the Council implementing the recommendations of the European Parliament.

TVR MOLDOVA - What are your expectations from this Eastern Partnership Summit?

Andi Cristea: The summit should reiterate the European Union's commitment to supporting countries that want to join the EU at a certain moment. Encouraging these countries, which have complicated internal situations, must be a priority as well as sending an ambitious political message that enlargement is not blocked as long as the EU is in a process of reflection on its future. Obviously the criteria are and will continue to be very serious, but the summit is an opportunity to send a message to the citizens of those countries who see the hope, development, future in the European Union in the end. These people are exposed daily to anti-Western propaganda and it is up to us to demonstrate that the European Union thinks of them in the most concrete way possible.

TVR MOLDOVA - There are electoral years for Ukraine and Moldova. Does it exist the fear in the EU that Russia can be involved in these elections?

Andi Cristea: It's no secret that Russia is trying to gain direct power through President Dodon's party (PSRM). If this happens, Moldova will likely become a Moscow's province.
Then the European road we're talking about might be stopped and I believe the West can again play a mediating role between the pro-European political parties that fail to understand at least in the last two years, the Moldovan interest must become more important than the relations and personal animosities. It is a signal I transmit and hope to be understood in Chisinau, but also in Brussels.
AFLĂ imediat Știrile Publika.MD. Intră pe Telegram