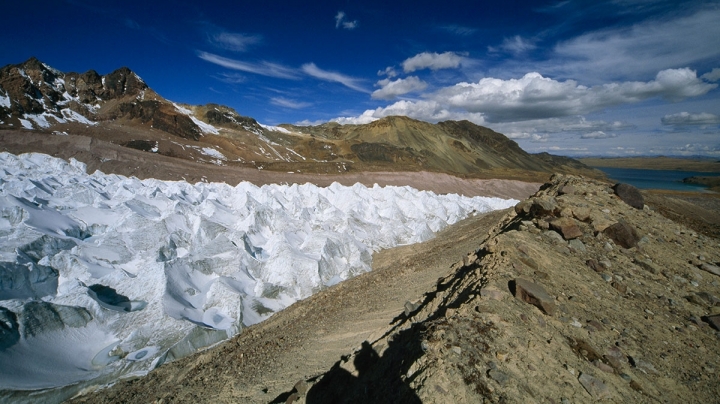 The snowcapped skyline of the Andes is beating a hasty retreat. Since the mid-1970s, the area covered by glaciers in Peru’s Cordillera de Vilcanota range has nearly halved, with most losses occurring below 5000 metres, reports New Scientist.

Using Landsat images taken every decade, glaciologists at the Federal University of Rio Grande do Sul in Brazil measured the snowline of the southern Peruvian range and found the ice caps that feed the glaciers shrinking.

Overall, they found that 48 per cent of ice had disappeared since 1975, with 81 per cent vanishing in areas below 5000 metres. As global warming continues, such tropical glaciers are likely to disappear.

Losses are occurring at different speeds on either side of the mountain range. “In general, the western sides of the tropical Andes maintain cold and dry conditions, whereas the eastern sides are humid and warm,” says Bijeesh Veettil, who led the study.

The humid air that circulates in from the Amazon basin to the east should bring rain that replenishes the ice, but the high eastern glaciers are balding faster than their west-facing partners. At the moment, the reason for this disparity is unclear, but the researchers are conducting further studies to solve the mystery.

The Andes host more than 95 per cent of the world’s tropical glaciers, a rich source of water for drinking, hydroelectric power and farming.

The most pressing impacts from glacier loss on local people are dwindling water resources and the loss of wetland grasses that they feed to livestock, says Renny Aguilar Diaz at the Peruvian National Meteorological and Hydrological Service.

Glacial lakes pose another threat. These form behind natural dams made of ice and fractured rock, but excessive meltwater can break them open, causing devastating flooding and the loss of these crucial reservoirs.

The research backs the idea that glaciers are retreating quickly, says Doug Hardy at the University of Massachusetts at Amherst, who has studied ice caps in the region. He doubts that the peaks will regain their previously ice-capped area.