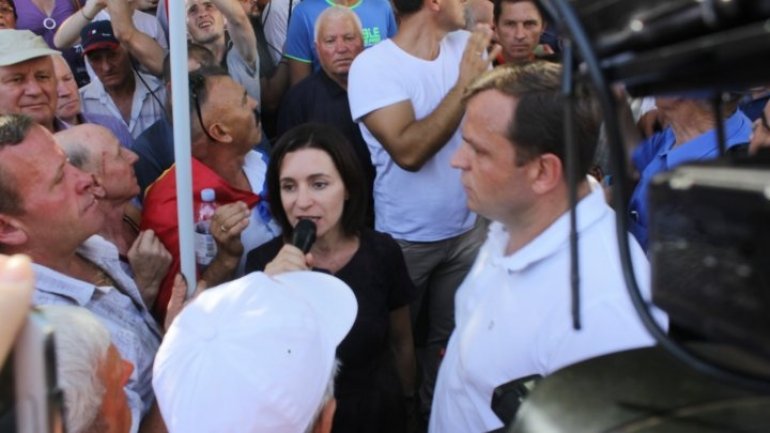 Maia Sandu, the leader of the Party of Action and Solidarity of the Republic of Moldova (PAS, opposition) is the politician to whom both the leaders of the European People's Party (EPP) and an considerably large part of the Moldovan electorate have given hope.

Maia was perceived as a fight against corruption, as an honest political leader, who has the courage to fight everyone for principles and values.

Some of the EPP leaders have given her unconditional support, even if Maia has proven on several occasions that she can not overcome her limits. Following with the European leaders betting on Filat, after supporting him until the last moment, now Maia is the character who can help "wash" the mistake made by EPP when they unconditionally supported a corrupt leader to the marrow bones but having the ability to gain percentages.

Even if she had a strong support from both leading European leaders and a good part of Moldovan electorate, Maia Sandu fails to become a winning option. Although in opposition, the PAS leader fails to grow in polls. On the contrary, all data show that it decreases when it comes to population confidence.

If in the presidential election she managed to score 38.71% in the first round and in round 2 to collect another 10 percent from the other anti-Dodon forces, reaching 47.89%, now Maia no longer passes 22% in trust, according to surveys.

Maia Sandu can not grow in polls, although she is in opposition. The causes can be multiple, we can talk about not having a very high visibility on TV, we can say that the game between the Democratic Party (PDM) and President Igor Dodon polarizes the public attention, there are arguments that can explain why Sandu manages to grow in polls. But all of this is part of the political game. You have to find solutions to overcome the barriers your opponents have. This makes a politician find solutions, because he has to win.

Is Maia Sandu a political leader? If we look at her past, the mistakes she made, we might say she's not. She fails to have a clear strategy, fails to bring a plus in her speech, can not impart the winner's image.

During the presidential campaign, after the PDM candidate's withdrawal, she kicked the party's electorate. The statements made then showed us that Maia has little political sense. Instead of trying to bring a part of the PDM electorate on her side, she preferred to kick them.

At the same time, Maia Sandu did not want to bring the geo-political theme into the speech. Strongly opposed, even if all Moldovan analysts said that this issue is needed to mobilize the pro-EU electorate to vote. It was a huge mistake that cost her votes. Maia Sandu prefers to stay in her comfort zone, anti-corruption discourse and so on.

In the last year, since the elections, the PAS leader has failed to impose any debate.

She made mistakes on tape: she associated her image with Usatîi and the Communists in the fight against the uninominal vote. Although the PAS supported the reform of the electoral system, when it came to deciding on the change of the system, the party opposed it.

And this is not everything. At the PAS Congress, Maia Sandu managed to hurt everything with the bat in the pond when she said that the 1918 Union was forced. I'm not discussing here again that after three days she went public to explain the statement. Instead of minimizing the impact, she managed to sink even more. An unforgivable mistake. Alone, from the stand, without being in a debate, without having a hostile moderator, without having to face her opponents, makes a big mistake.

All these cases show that Maia is still far from being a political leader who can adapt to the situations of the game. We have here a leader who can not adapt, can not lead the game and bleeds easily. Yes, with all goodwill, with all sympathy for her struggle, Maia Sandu can not be the winner in the heroic field of Moldovan politics. This explains why we will see in the future, at best, a survey cap, around a modest figure. Maia Sandu can not do much more. She can not get the number one option in Moldova, she can not be a winning leader, writes stiripesurse.ro
AFLĂ imediat Știrile Publika.MD. Intră pe Telegram