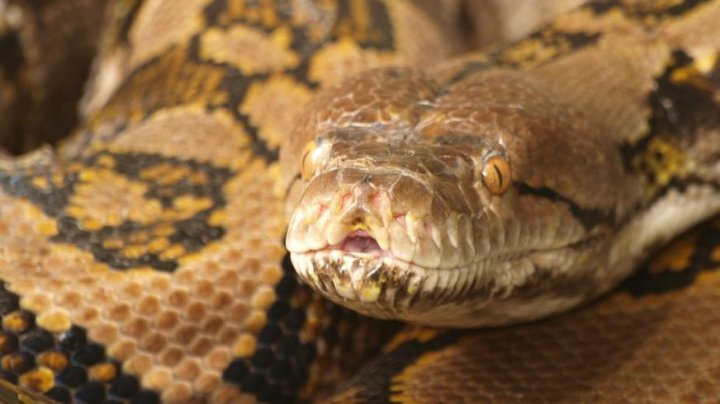 An Indonesian woman has been killed and swallowed whole by a 7m (23ft) long python, say local authorities, writes BBC.

Though such incidents are incredibly rare, this was the second python death reported in Indonesia in just over a year.

Wa Tiba, 54, went missing last Thursday while checking on her vegetable garden on Muna island in Sulawesi province. A huge search was mounted by local people.

Her sandals and machete were found a day later - a giant python with a bloated belly was lying about 30m away.

"Residents were suspicious the snake swallowed the victim, so they killed it, then carried it out of the garden," local police chief Hamka told news outlet AFP.

"The snake's belly was cut open and the body of the victim was found inside."

Gruesome footage has been circulating on social media in Indonesia showing the woman's body being recovered intact in front of a large crowd.

The python in Sulawesi is believed to have been a reticulated python.

They can reach lengths of more than 10m (32ft) and are very powerful. They attack in an ambush, wrapping themselves around their prey and crushing it - squeezing tighter as the victim exhales.

They kill by suffocation or cardiac arrest within minutes.

Pythons swallow their food whole. Their jaws are connected by very flexible ligaments so they can stretch around large prey.

When it comes to eating humans, "the restricting factor is human shoulder blades because they are not collapsible," Mary-Ruth Low, conservation & research officer for Wildlife Reserves Singapore and a reticulated python expert, told the BBC in an earlier interview.

"Pythons are almost exclusively mammal feeders," Ms Low points out, though they do occasionally eat reptiles, including crocodiles.

Typically they eat rats and other small animals, she said, "but once they reach a certain size it's almost like they don't bother with rats anymore because the calories are not worth it".

"In essence they can go as large as their prey goes."

That can include animals as large as pigs or even cows.

Sometimes the size of the meal can be misjudged. In 2005 a Burmese python tried to swallow an alligator whole in Florida. It burst in the process and both died, their bodies later being found by rangers.

But these opportunistic hunters can be surprisingly picky too. If they don't see suitable prey, they can go for long periods on very little food until they see something big enough.

No. In 2002, a 10-year-old boy was reportedly swallowed by a rock python in South Africa.

And in March last year - also in Sulawesi - a farmer was swallowed by a 7m-long python.

The 25-year-old from West Sulawesi was on a palm oil plantation near his village when he was attacked. Video footage showed his body being extracted.

Also last year, a man from the Indonesian province of Sumatra managed to fight off a 7.8m-long python who had attacked him while he was on a palm oil plantation. He survived with serious injuries.

Previous claims often involved hard-to-prove cases that happened some time before they were reported, in remote areas and without reliable witnesses.

Anthropologist Thomas Headland, who spent decades among the Agta, a group of hunter-gatherers in the Philippines, had claimed that a quarter of the tribe's men had been attacked by reticulated pythons at some point.

Though almost all fended them off with machetes, adult Agta - who are physically small - were occasionally eaten, his research said.

The latest victim's garden was located at the base of a rocky cliff littered with caves, known to be home to snakes, according to the local police chief.