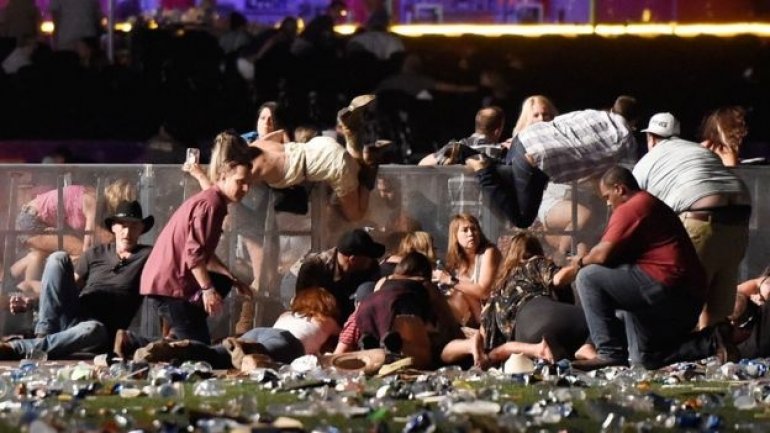 Police have named Stephen Paddock as the gunman who killed at least 58 people and hospitalised 515 others at a Las Vegas concert.

The 64-year-old, of Mesquite, Nevada, sprayed bullets at music-lovers as a gig by country singer Jason Aldean was ending on Sunday night, said officers.

Paddock was a retired accountant who flew small planes and had no criminal record, said authorities.

Investigators have ruled out a link to international terrorism.

It is the deadliest shooting in modern US history, with the death toll surpassing the 49 killed at a nightclub in Orlando, Florida, in June 2016.

The suspect opened fire from the 32nd floor of the Mandalay Bay Hotel and Casino and killed himself as police closed in, said officials.

Las Vegas Sheriff Joseph Lombardo said investigators found "in excess of 10 rifles" in the hotel room that Paddock checked into on 28 September.

The FBI said its agents had established no connection between Paddock and any overseas terrorist group, despite a claim from so-called Islamic State.

One US official told Reuters news agency the gunman had a history of psychological problems.

According to NBC News, Paddock recently made several gambling transactions in the tens of thousands of dollars.

The network, citing law enforcement officials, said it was unclear whether those bets were wins or losses.

The suspect's brother, Bruce Paddock, told NBC his brother had made money through apartment buildings, which he owned and managed with his mother, who lives in Florida.

Investigators have searched the suspected gunman's two-bedroom home, which is part of a retirement community about one hour from Las Vegas.

Quinn Averett of Mesquite Police said it was a "nice, clean home, nothing out of the ordinary".

He said he believed some weapons and ammunition were found inside.

In 2012, Paddock filed a negligence lawsuit against The Cosmopolitan hotel in Las Vegas, after a fall caused by an "obstruction" on the floor, according to his brother.

The legal action was dropped by both parties in 2014.

Ms Danley, 62, was thought to be the gunman's girlfriend.

She was not with Paddock when he checked into the Mandalay, police said.

Investigators said Ms Danley had been traced outside of the US.

They said Paddock had been "utilising some of her identification".