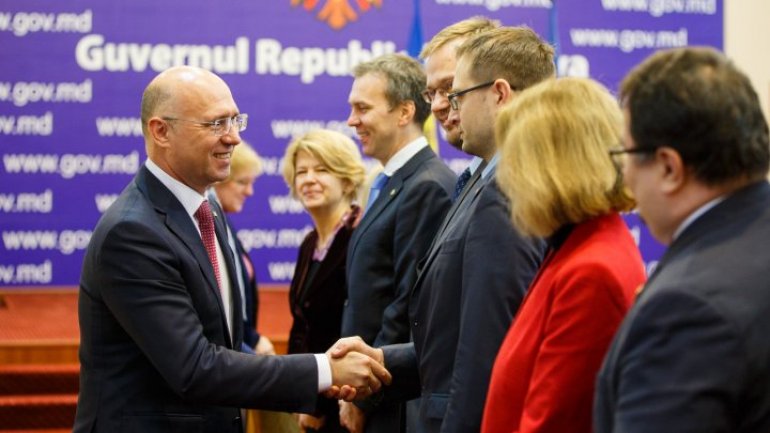 Prime Minister Pavel Filip met today with the Ambassadors of the Member States of the European Union, the United States of America and Turkey accredited in Chisinau, as well as representatives of the development partners. The sides exchanged views on progress made this year in implementing reforms and discussed priorities for 2018.

In this context, Prime Minister Pavel Filip mentioned that the reshuffle in the Cabinet of Ministers aims to depoliticise the Government, so that during the next year, which is an electoral one, the process of implementation of the reforms does not decrease from the intensity.

"After the structural reform, an objective and transparent competition for the selection of state secretaries, the next stage has taken place today - the depoliticisation of the Government. I do not want the Executive to be paralyzed by the electoral run, but I want the government institutions to be directly focused on the implementation of the reforms ", emphasized Pavel Filip.

The ambassadors accredited in Chisinau and the development partners wished the Government to succeed in its new composition, encouraging it to remain focused on implementing the reform agenda and fulfilling all the commitments made to the development partners. At the same time, officials have expressed their readiness to provide further assistance in this process, in the form of expertise and financial support.

Referring to plans for the future, Prime Minister Pavel Filip specified that priorities for 2018 remain European integration and reintegration of the country. Speaking about the Transnistrian settlement process, the prime minister said that the Executive will be proactive in the coming period.

"We will come up with many proposals and initiatives so that we will at least eliminate the problems in the first basket and provide the necessary comfort for the citizens of the region," said Pavel Filip.

At the end of the meeting, Prime Minister thanked Ambassadors and development partners for the continued support given to the Republic of Moldova, noting that our country needs support to continue the reforms