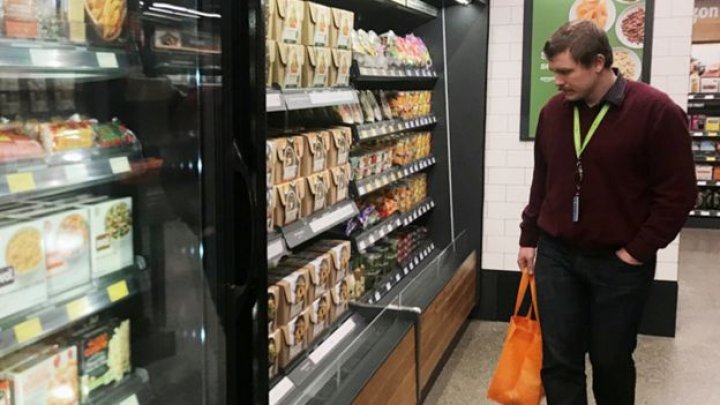 In a move that could revolutionize the way we buy groceries, Amazon opens its first supermarket without checkouts - human or self-service - to shoppers on Monday.

Amazon Go, in Seattle, has been tested by staff for the past year.

It uses hundreds of ceiling-mounted cameras and electronic sensors to identify each customer and track what items they select.

Purchases are billed to customers' credit cards when they leave the store.

On entering the store, shoppers walk through gates similar to those in the London underground, swiping their smartphones loaded with the Amazon Go app.

Then they are free to put any of the sandwiches, salads, drinks and biscuits on the shelves straight into their own shopping bags.

There's no need for a trolley or basket, since you won't be unpacking it again at the till. In fact, unless you need to be ID-checked for an alcohol purchase, there's also no need for any human interaction at all.

With the help of sensors on the shelves, items are added to customers' Amazon Go account as they pick them up - and delete any they put back. And an electronic receipt is issued as they exit.

The store opened to employees of the online retail giant in December 2016 and had been expected to allow the public in more quickly.

But there were some teething problems with correctly identifying shoppers of similar body types - and children moving items to the wrong places on shelves, according to an Amazon insider.