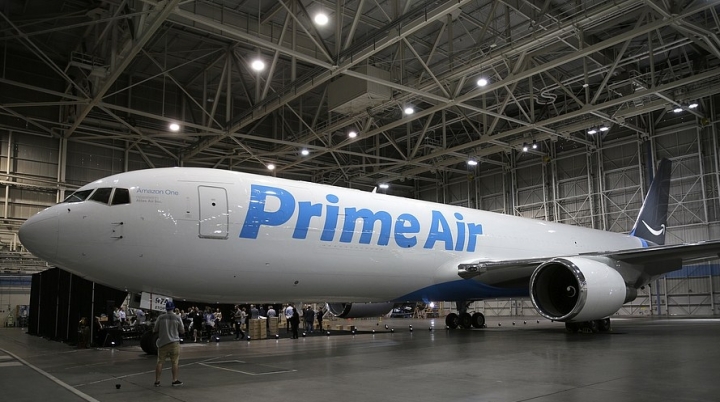 Amazon has revealed the latest weapon in its quest to make delivery for its Prime customers even quicker - a sleek new Boeing 767-300, reports Daily Mail.

The online retailing giant plans to unveil its first branded cargo plane, dubbed Amazon One, to the public at the Seattle Seafair Air Show on Friday.

It is the first of 40 planes that will make up the company's fleet, aimed to remove the middlemen for long distance deliveries.

The move will speed up the fulfillment of Amazon orders as the company ships an increasing number of packages worldwide.

Amazon's senior vice president of worldwide operations, Dave Clark, explained aircraft like Amazon One allow the company to 'continue to maintain our fast delivery speeds and lower our costs as our Prime base and our Prime member growth continue to soar.'

Last year an estimated one billion packages were transported by Amazon - the same number FedEx delivered three years earlier to its hundred of thousands of customers.

Amazon will hope that by taking delivery in house it will not have a repeat of reliability issues it has suffered in the past.

It was forced to offer refunds to customers who received their Christmas orders late in 2013 after bad weather and a jump in online shopping caused delays for UPS and FedEx.

Analysts say it makes sense for Amazon to use an air fleet it controls as another way to get its products to online shoppers drawn to fast, no-extra-cost delivery.

The company's first branded 'Prime Air' cargo plane will fly over Seattle's Lake Washington, just before the Navy's Blue Angels take to the skies on Friday afternoon at the city's famous air show.

Eleven of the planes already are delivering packages for Amazon's annual Prime loyalty program, which offers free two-day shipping and other perks. The remaining freighters will be rolled out over the next couple of years.

Despite its growing fleet of aircraft, Amazon said it plans to continue to use FedEx, UPS and other transportation partners.