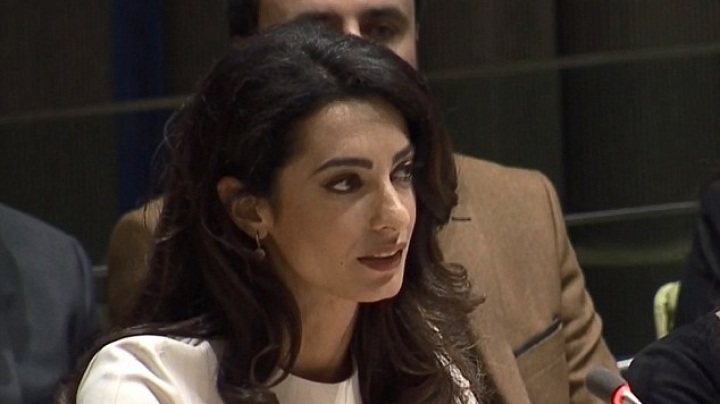 Amal Clooney has called on the UK to take more refugees from Syria.

The human rights lawyer urged British Prime Minister Theresa May to press the UN to tackle ISIS, just a day after announcing her intention to mount a legal case against the jihadist group on behalf of a Yazidi sex slave, Nadia Murad.

The wife of Hollywood actor George Clooney also said she would be 'delighted' to work on a prosecution of Syrian president Bashar Assad over crimes against humanity and war crimes.

Speaking to Channel 4 News alongside Nadia, Mrs Clooney said: 'I would hope that more could be taken in.
'There has been one Yazidi family that has been given asylum so far in the UK.

'You have had a million refugees accepted in Germany in the last year and 70,000 of those have been Yazidis.
'In every other country it's been literally a handful, so I'm hoping that can improve

'Actually one of the positive signs is that Prime Minister May when she was Home Secretary had instituted the idea that there should be the ability for private sponsorship.

Mrs Clooney was also keen to take Syrian president Assad to task - and wants to be part of it.