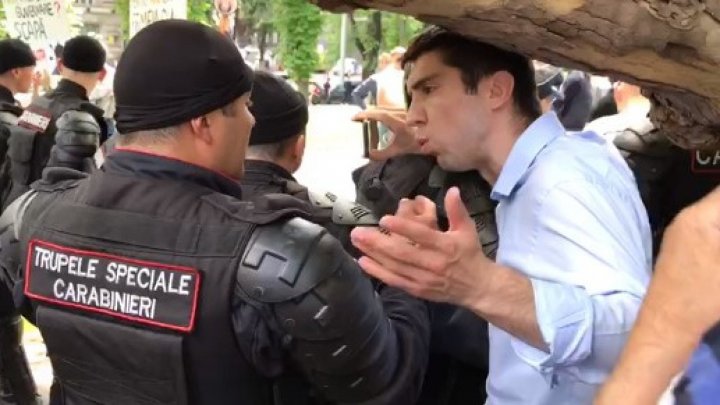 The General Police Inspectorate's chief is confused of the PAS deputy's behavior, Mihai Popsoi, who tried to intimidate the riflemen officers during the yesterday rally. Alexandru Pinzari declared during the Publika TV talk-show that Popsoi had an emotional disorder or he just tried to provoke the men of the law who were taking care about the public order at the manifestations organized by Andrei Nastase and Maia Sandu.

"-What have I done?
-Hands off the policemen!
-What I've done?
-You stung them.
-You will be criminally liable. The problem is there, not here. I am a Parliament's deputy.
-Mister!
-Do I have to show my badge?
-You don't have to show me something. I didn't push you. I said that the problem is here.
-Do you have a problem with me?
-Don't cross!
-Where do I have to not cross?
-Don't touch the people".

"My colleague is well-trained and professional. On the other side I think there is an emotional disturbing, or it was a challenge, in my personal opinion".

Yesterday, PAS and PPDA leaders brought a few dozen people in the front of the Government to protest against fuel's cost increase. Shortly after, hundreds of young people organized an action against ACUM political alliance. Demonstrators came to confront PAS and PPDA leaders for the political crisis in the country.

Policemen had to form a wall to break those two sides, but Andrei Nastase took advantage from the created situation and hid behind the men of law.
AFLĂ imediat Știrile Publika.MD. Intră pe Telegram