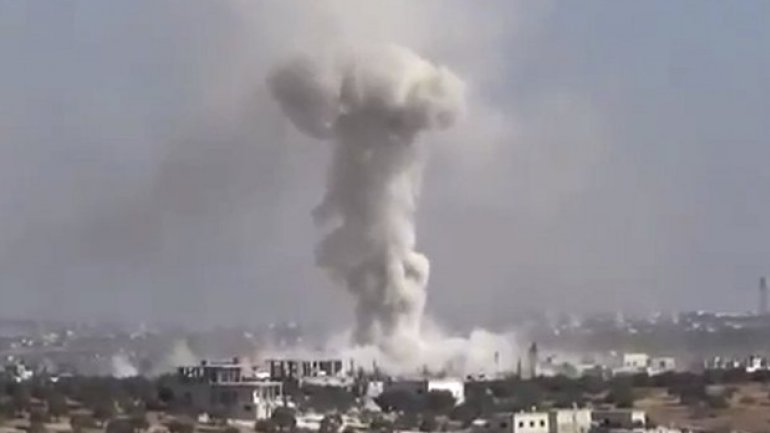 Regime airstrikes on a school complex in northwestern Syria killed at least 35 people, including 16 children, the London-based Syrian Observatory for Human Rights said, in what could be one of the deadliest strikes yet on a school in the nation's five-year war, according to the UN, reports CNN.

Seven women were also among the dead, and the death toll is expected to rise as dozens of others were injured in the Wednesday attacks. Many are in critical condition, the observatory's director Rami Abdulrahman told CNN.

He said that jets hit the complex and the surrounding area in the village of Hass, in Idlib province, six times. The school had students from the first to ninth grade enrolled.

The observatory blamed the strikes on the regime, but it is difficult to distinguish between Syrian and Russian jets. Russia has been supporting President Bashar al-Assad's regime with airstrikes since September 2015, and the two have been widely criticized for targeting civilians, and hospitals and schools in rebel-held areas.

The Syrian Civil Defense - a volunteer rescue group also known as the White Helmets - said that there were three schools in the complex, and shared photos on social media showing buildings reduced to rubble.

In an interview with the activist-run SMART News Agency, one of the rescuers said the strikes hits as students were leaving school. "At least 50 kids were in front of the school door and it was all strikes. You see here the strike hit right in the middle of the school," he said.

UNICEF, the UN agency for children, said that the strikes may amount to a war crime.

"It's a tragedy. It's an outrage. And if deliberate, it's a war crime" UNICEF executive director Tony Lake said in a statement.

"This latest atrocity may be the deadliest attack on a school since the war began more than five years ago," he said.

"When will the world's revulsion at such barbarity be matched by insistence that this must stop?"

Many hospitals and schools in Syria have been forced underground to avoid becoming targets of regime and Russian airstrikes, particularly in rebel-held eastern Aleppo.