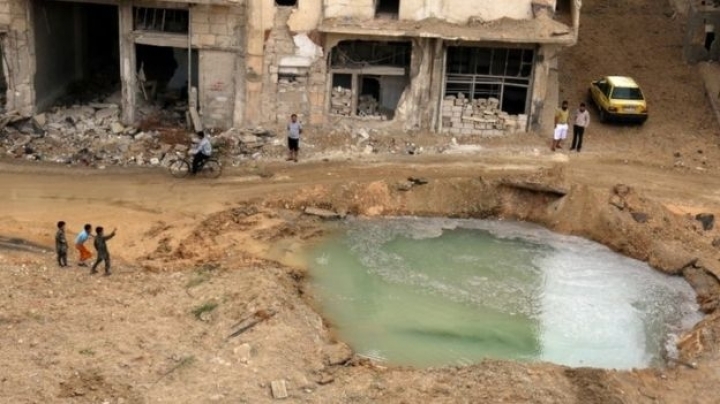 Intensified attacks on the Syrian city of Aleppo have left nearly two million people without water, the UN says according to BBC.

In retaliation, Unicef says, a nearby station pumping water to the rest of Aleppo has been switched off.

Fresh strikes were reported in the city on Saturday, as the Syrian army presses on with its push to retake rebel areas.

The latest offensive was launched after a ceasefire collapsed on Monday.

Unicef deputy director Justin Forsyth told the BBC: "Aleppo is slowly dying, and the world is watching, and the water is being cut off and bombed - it's just the latest act of inhumanity."

Unicef spokesman Kieran Dwyer said the lack of running water could be "catastrophic" as residents now had to resort to contaminated water and were at risk from waterborne diseases.

He said water was being used as a weapon of war by all sides. The pumping station supplying rebel-held parts of Aleppo was damaged on Thursday and subsequent strikes had made repairs impossible, Mr Dwyer told the BBC.

The Syrian Observatory for Human Rights, a UK-based group monitoring the conflict, said 25 people had been killed in fresh bombardments on Saturday.

Activists said both Syrian and Russian warplanes are taking part in the latest offensive, though Russia has not confirmed its involvement.

Russia supports the Syrian government, while the US backs the opposition. The two powers accuse each other of failing to rein in their respective allies on the ground.

A seven-day truce brokered by the US and Russia collapsed on Monday.

The head of a hospital in the rebel-held east told Reuters news agency that 91 people had been killed in Friday's bombardment.

In between the raids, civil defence volunteers known as White Helmets frantically searched for those trapped in the rubble of demolished buildings, often with bare hands.

Announcing the new offensive on state television late on Thursday, the Syrian government warned Aleppo residents to "stay away" from "terrorist positions".