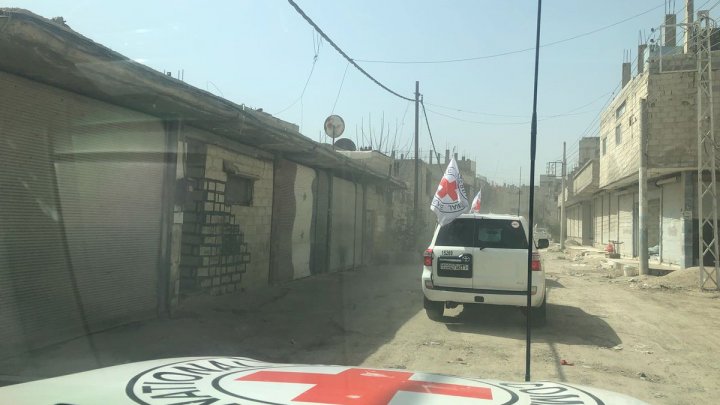 An aid convoy of lorries carrying urgently needed humanitarian supplies has entered the rebel-held Syrian area of the Eastern Ghouta.

The 46 trucks are the first to reach the besieged enclave since mid-February, despite a recent UN-backed ceasefire and short, daily truces ordered by Russia.

At least 719 people have been killed in that period, many of them children.

Another 5,640 people have been injured in the Eastern Ghouta, an agricultural region east of the capital Damascus, according to a local opposition-run health directorate.

If the convoy of trucks are able to deliver their food and aid supplies to the 27,500 people it is supposed to, despite nearby shelling, it would be a "significant beginning", according to the BBC's Jeremy Bowen.

A World Health Organization official told Reuters that Syrian government officials had removed 70% of the supplies, which included surgical materials and trauma kits, from the trucks before they had left warehouses. This is believed to be part of the government's efforts to ensure rebels are not treated.

The Syrian government and its allied forces have reclaimed a third of the rebel enclave in the Eastern Ghouta in a matter of days, according to the UK-based Syrian Observatory for Human Rights (SOHR), which has a network of sources on the ground. The region had been under the control of Islamist and jihadist groups since the civil war began in 2012.

President Bashar al-Assad said on state television on Sunday that the offensive against "terrorism" should continue, and he dismissed dire assessments of the humanitarian situation in the enclave as "ridiculous lies".

He said he supported a Russian-sponsored daily truce of five hours, to allow "the majority of those in Eastern Ghouta" to escape the areas under the control of "terrorists".

The US has condemned the government assault and said Russia, a key ally of Damascus, is killing innocent civilians.