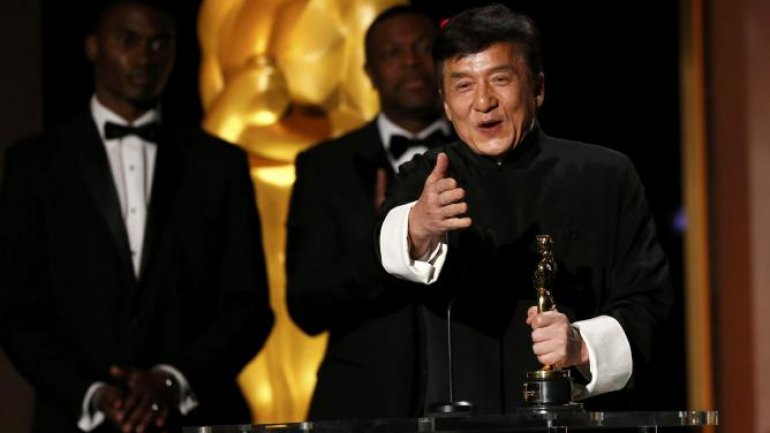 The Hong Kong actor Jackie Chan had star billing at the Governors awards on Saturday night, in which the Academy of Motion Pictures and Sciences handed out four honorary Oscars, reports The Guardian.

Introducing Chan, Tom Hanks acknowledged that the blend of slapstick comedy and martial arts virtuosity for which the star became famous was “historically underrepresented at the Oscars”.

“Standing here is a dream,” said Chan at the podium. “After 56 years in the film industry, making more than 200 films, breaking so many bones, finally this is mine.”

The actor, 62, said winning the award marked the fulfillment of an ambition he’d conceived 23 years ago when touching one of the statuettes at Sylvester Stallone’s house. Stallone was in attendance at the event, alongside Denzel Washington, Lupita Nyong’o, Nicole Kidman, Emma Stone, Ryan Reynolds, Judd Apatow, Helen Mirren and Amy Adams.

Editor Anne V Coates, 90, and casting director Lynn Stalmaster, 88, also picked up awards; the latter, who worked on West Side Story, The Graduate, Harold and Maude and Tootsie, among others, was introduced by actor Jeff Bridges as “the master caster”. Meanwhile, the British-born Coates, 90, whose work includes Lawrence of Arabia, The Elephant Man and Out of Sight, said she had enjoyed a career that involved staring into the eyes of leading men.

Last year’s awards – honoring Spike Lee, Debbie Reynolds and Gena Rowlands – were dominated by talk of diversity, ahead of the resurgence of the #OscarsSoWhite controversy. This year, Academy president Cheryl Boone Isaacs flagged the changes that had been made over the summer to try to address what some see as an overly white and male make-up of the membership.

“We’re not at the mountaintop yet, but we can see the peak up ahead,” she said. “Imagine the difference it will make when we open our industry to reflect the complete mosaic and diversity of our world and the movements and conversations it can trigger.”