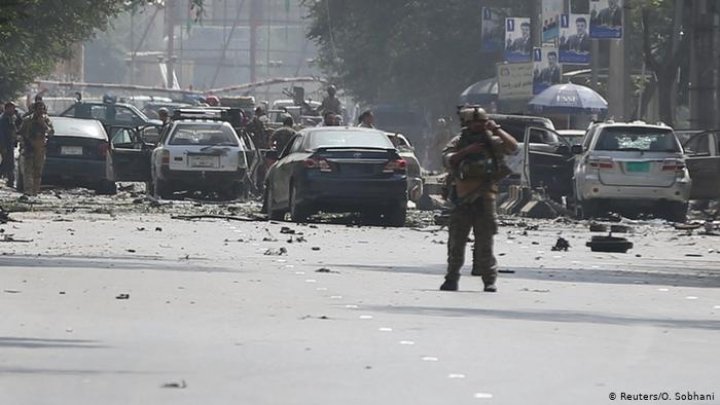 A car bomb rocked central Kabul on Thursday near an area housing the US Embassy and other diplomatic missions. The blast, caused by an explosives-laden bus, targeted a security checkpoint near NATO's Resolute Support Mission headquarters.

"We confirm an explosion in the Shashdarak area" at about 10:10 am (05:40 GMT), said interior ministry spokesman, Nasrat Rahimi.

At least 10 civilians were reported killed, according to the spokesman. The Taliban have claimed responsibility for the attack.

The blast comes after a Taliban suicide bombing in eastern Kabul on Monday night, which killed at least 16 people and wounded more than 100, almost all of them local civilians. One of the dead was Romanian who was part of the diplomatic mission’s security team and risked his life to save the others, according to Romania’s foreign affairs minister Ramona Manescu. Another Romanian citizen was injured in this attack.

At the time of the attack on Monday, there were 12 diplomats in the Romanian Embassy in Kabul. All the survivors were transferred to a military base, including the head of Romania’s diplomatic mission in Afghanistan and the Embassy’s head of security.

The Thursday attacks are taking place even as Zalmay Khalilzad, the US special envoy for Afghanistan, is visiting Kabul to brief the Afghan government about the status of his talks with the Taliban.

The deal would see the US withdraw some 5,000 troops stationed at five bases across Afghanistan, writes Deutsche Welle.

Khalilzad said the troop reduction would occur within around four months of a final deal being approved — if the Taliban stick to their commitments, including reducing violence.

US President Donald Trump would still need to approve the deal, which was hammered out during the latest round of talks with the Taliban in Doha, Qatar.

Despite ending their combat role in 2014, an estimated 20,000 US and NATO personnel remain in the war-ravaged country to train and support Afghan forces.

And the Taliban have long demanded all foreign troops leave the country. The Taliban now control or hold sway over roughly half of Afghanistan and are at their strongest since their 2001 defeat by a US-led invasion in the wake of the 9/11 attacks.

The militants have continued their bloody assaults even as their leaders meet US peace envoys in Doha.