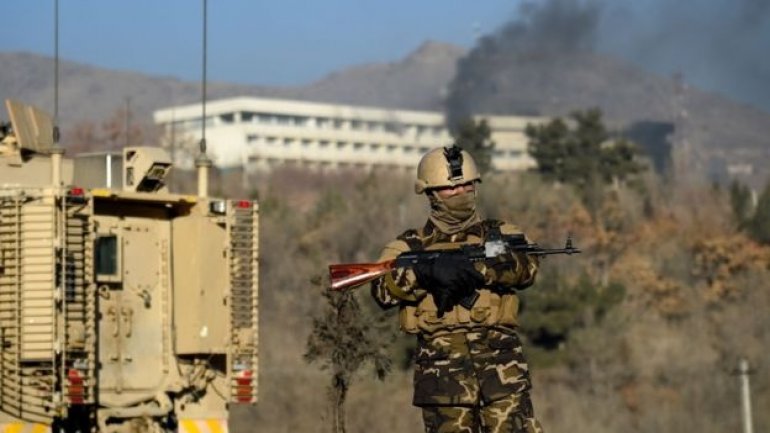 An overnight siege of a luxury hotel by gunmen in the Afghan capital has come to an end, security forces say.

Six civilians, including a foreign woman, died at the Intercontinental Hotel in Kabul, along with three attackers, the interior ministry said.

Some 160 people were rescued after Afghan troops fought through the night to regain control of the building.

Some reports suggested gunfire had continued for some time after the authorities declared the siege over.

Afghan news agency Tolo says the death toll could be higher than the official figure, quoting a reporter who said they had seen dozens of bodies inside the hotel.

Afghan airline Kam Air told local journalist Bilal Sarwary it had 42 members of staff in the hotel, some of whom are foreign nationals; 18 are still missing with five feared dead.

The Taliban, which targeted the hotel in 2011, says it was behind the latest attack. A spokesman said in a statement quoted by AFP that the group had "killed tens of foreign invaders and their puppets".

The gunmen burst into the six-floor hotel at around 21:00 local time (16:30GMT) on Saturday evening, as guests were enjoying dinner.

Afghan Telecom regional director Aziz Tayeb, who was one of dozens of guests due to attend an IT conference at the hotel on Sunday, said he saw the attackers arrive as he was heading towards the exit.

"Everything became chaotic in a moment," he told the AFP news agency. "I hid behind a pillar and I saw people who were enjoying themselves a second ago screaming and fleeing like crazy, and some of them falling down, hit by bullets."

The gunmen - armed with rocket-propelled grenades as well as smaller weapons - stormed through the hotel taking many of the guests hostage.

"They were shouting... 'Don't leave any of them alive, good or bad. Shoot and kill them all," another guest, Abdul Rahman Naseri, said.

Several guests were pictured using bed sheets to try to climb down from a top-floor balcony.

One of them, Mohammad Musa, said his roommate suggested they escape that way after a fire broke out on their floor. "I tried to come down but I was heavy and my arms were not strong enough," he said. "I fell down and injured my shoulder and leg."

Afghan special forces were lowered by helicopters on to the roof of the hotel during the night, an interior ministry spokesman said.

They were working with Western special forces to bring the siege to an end.

Forty-one foreigners were among those rescued and seven people were wounded, according to figures from the interior ministry.

The ministry has promised an investigation into how the attackers breached security, which was handed to a private company two weeks ago.

Hotel manager Ahmad Haris Nayab said the gunmen had entered the hotel through a kitchen.