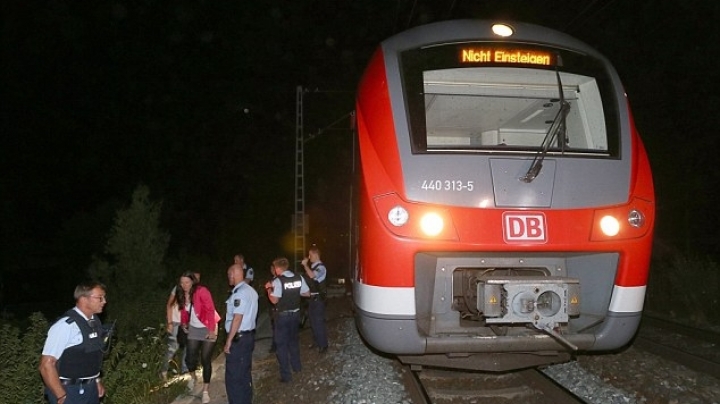 A teenage Afghan refugee shouted 'Allahu Akbar' before hacking at passengers during an axe rampage on a train in Germany - in scenes likened to a 'slaughterhouse', reports Daily Mail.

The 17-year-old was gunned down by armed police after fleeing from the scene near the city of Wurzburg, 70 miles north of Nuremberg in southern Germany.

As many as 19 passengers needed hospital treatment while three victims are fighting for their lives after being attacked with 'cutting and stabbing weapons'. Officials have said it was 'probably' an Islamist attack.

An eyewitness said the train, which had been carrying around 25 people, looked 'like a slaughterhouse' after the attack, with blood covering the floor.

The man, who declined to give his name, said he saw people crawl from the carriage and ask for a first-aid kit as other victims lay on the floor inside.

The onslaught started on the train from Treuchtlingen to Würzburg as the service stopped at Würzburg-Heidingsfeld.

As well as the three critically injured victims, one other passenger is believed to have non life-threatening injuries while 14 others suffered minor injuries or shock.

The attacker was eventually shot dead by police after running from the train.

Joachim Herrmann, the interior minister of Bavaria state, said the perpetrator was a 17-year-old Afghan who had lived in nearby Ochsenfurt. He has not yet been named.

'It is quite probable that this was an Islamist attack,' said a ministry spokesman, adding that the attacker had shouted 'Allahu akbar' (God is greatest).

A police spokesman added: 'Shortly after arriving at Wuerzburg, a man attacked passengers with an axe and a knife.

'Three people have been seriously injured and several others lightly injured.'

He added: 'The perpetrator was able to leave the train, police left in pursuit and as part of this pursuit, they shot the attacker and killed him.'

There were no further details on the circumstances of the teenager's death, and police declined to suggest what the motive was for the attack.

'At this time everything is possible,' the spokesman said.

Train services have come to a halt between Wurzburg-Heidingsfeld and Ochsenfurt and a police helicopter is circling the area.

Authorities have said the attacker entered Germany as an unaccompanied child refugee.

Local media report that he had lived with a German foster family for two weeks having previously lived in a refugee camp.

The Bavarian interior ministry confirmed that police had shot and killed the attacker and a special task force has been dispatched from Wurzburg.  Police believe the attacker worked alone.

Germany had thus far escaped the kind of large-scale jihadist attacks seen in the southern French city of Nice last week, in which 31-year-old Mohamed Lahouaiej Bouhlel used a truck to mow down people leaving a Bastille Day fireworks display, killing 84 people in an attack claimed by ISIS.

In May, a mentally-unstable 27-year-old man carried out a similar knife attack on a regional train in the south, killing one person and injuring three others.