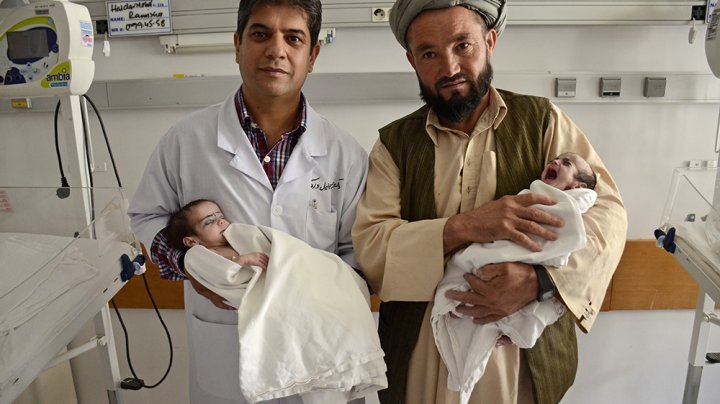 When Afghanistan-born Waheed Arian came to the UK at the age of 15, he was told he'd probably become a taxi driver or perhaps work in a takeaway restaurant.

But the former refugee had other ambitions, to become a doctor.

"Having spent 15 years suffering from war in Afghanistan, hiding from the deadly rockets and the bombs and the shellings, and also having spent three years in a refugee camp, suffering from malaria and tuberculosis, then that passion in me to become a doctor in the first place was instilled from early age," says Arian.

Driven to help patients back in his country of birth and their ill-equipped care-givers, Arian started the charity Arian Teleheal.

The concept is simple - volunteer doctors in the U.K. and the U.S. use everyday technology, like smartphones, to advise local doctors in war zones or low resource countries.

Often that means a simple Skype or FaceTime call, but the charity has also experimented with augmented reality headsets.

"Medics in conflict zones, for example in Afghanistan, they're highly professional, they have got a lot of passion and they are very talented, but unfortunately because of the years of war, there has been a brain drain as well as the resources have been affected massively, so they can benefit from these specialist volunteers' advice," explains Arian.

Arian says the telemedicine service is now used in almost all of Afghanistan's 14 intensive care units. It's also used by doctors in the war-torn Syrian city of Aleppo.

Arian Teleheal is now being expanded into Africa with pilot schemes set to begin in South Africa and Uganda, where it will be used to help care for over one million refugees from South Sudan.

The charity now has over 100 volunteer doctors, ready to impart their knowledge, including radiology expert, Dr. John Curtis.

"We sometimes take it for granted all the work that we do within the NHS (National Health Service) because it becomes a routine," he says.

"But in a country where there isn't quite as much infrastructure or support or expertise, you can make a massive difference with just a short period of work."

The service is used in some locations deemed too hazardous to send international relief doctors from Medecins Sans Frontieres, for instance.

"Telemedicine, especially in Afghanistan, it's very important because nobody can come to Afghanistan and, because of the security," says Dr. Najib Suhraby, a doctor at Wazir Akbar Khan Hospital in central Kabul.

"And this is the main reason, that they cannot come to Afghanistan, and it's very easy way to contact with them and to consult the patients through telemedicine."

Afghan forces have struggled to fight the Taliban since the U.S. and NATO formally concluded their combat mission at the end of 2014.

They have also had to contend with a growing Islamic State affiliate that has carried out a number of big attacks in recent years.

Both the Taliban and IS carry out near-daily attacks in Afghanistan targeting security forces and government officials, but IS also regularly targets Shiite Muslims, who it views as apostates.

Arian says most telemedicine calls are related to trauma, whether it's car accidents and falls or injuries related to conflict, like bomb and rocket blasts.

"I think, it (telemedicine) is very good, because it makes things easier for us to avoid traveling abroad and it saves time," says Mazharuddin, the father of a patient at Wazir Akbar khan Hospital.

"They (specialists) can give advice to doctors here regarding the complexity of the case and it makes things easier."

Arian says it's not just a one way street, volunteer doctors also benefit from the process, helping save lives thousands of kilometres away with their knowledge.

"We wanted to create a system whereby our volunteers can learn, but also they feel good, they feel rewarded for what they do," he says.

"We're medics - whether doctors, nursing staff or other health care professionals - we're here because it's a vocation for us.

"And using simple technology to be able to give that advice in conflict zones is one of the best ways to get that reward instantly."

Arian was recently honoured for his work, he was given the 'Points of Light' award by British Prime Minister Theresa May. The award was created to recognise outstanding individual volunteers.