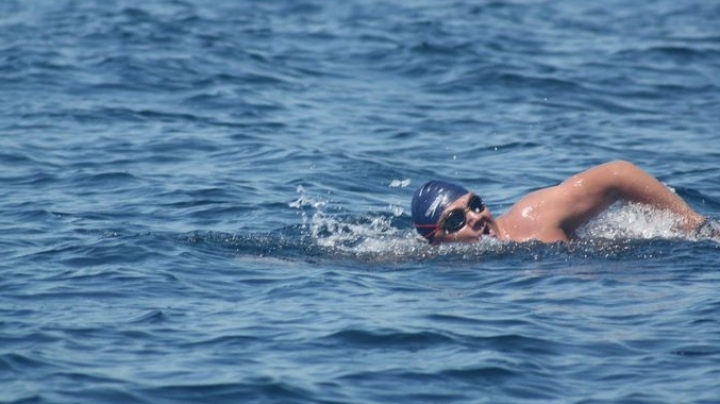 Ion Lazarenco had an infernal race while swimming in the Catalina Channel in California. He crossed 33 kilometers in 12 hours, 8 of them during the night.

Lazarenco claims that it was difficult since the beginning. In the first part of the distance he crossed a depression of 2 kilometers when water had a temperature of 14 degrees Celsius at most. And the adventures did not stop here.

“In the second hour the dolphins came. I felt them underwater and even saw them because I have night-vision glasses. But there also was something bigger than dolphins. I don’t even want to think what it was. I started to see the body, but it was not ending. I tried to look to other sides, so I would not see what is underwater” said the swimmer.

In spite of all difficulties, Ion Lazarenco successfully crossed Catalina Channel: “The Americans told me that the others who swam, were coming very slowly to the shore, but they proposed me to swim back the same distance.”

On October 1 2016 will be a new challenge for our compatriot. He plans to cross the Molokai Channel in Hawaii.

The Moldovan swimmer set himself to cross the world’s largest bays, and until now, aside from Catalina Channel, he crossed Gibraltar bay, English Channel and Canal du Nord.

From his swimming actions, Ion Lazarenco is collecting money to set up sport field in Moldova: “I am not doing this for trophies. i am doing this so that people would understand my message and will donate money to change something, to set up a playground.”

Both the crossing of Catalina Channel and the future crossing of Molokai Channel are financially supported by Vlad Plahotniuc’s Edelweiss Foundation.