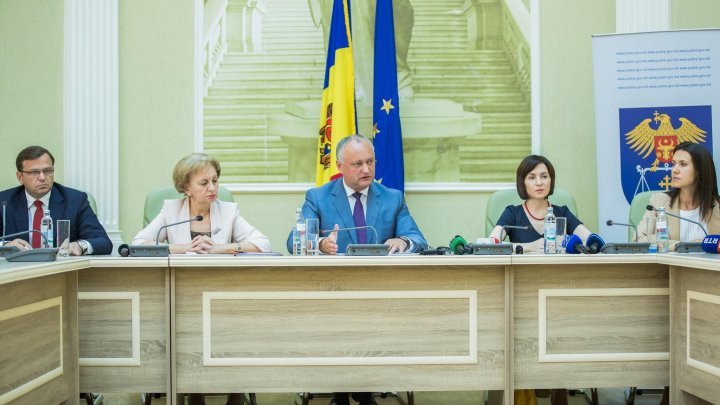 Government led by Maia Sandu proposes that the Minister of Justice establish a commission that will select two of the best potential candidates for the position of chief prosecutor and propose to the Superior Council of Prosecutors (CSP).

In turn, the CSP will choose one of the competitors and only then will propose it to the head of state for approval. President Igor Dodon acknowledges that, for the time being, there is no coalition consensus on this topic and talks about a monopoly on the General Prosecutor's candidacy.

President Igor Dodon, PM Maia Sandu, Chief of Legislative Zinaida Greceanîi and Minister of Justice Olesea Stamate organized a joint press conference in which they presented a concept of reforming the Justice, which foresees changes in the activity of several institutions, but also a evaluation of prosecutors and judges. Igor Dodon drew Justice reform on paper, but at the same time said the approach would be a serious one.

The reform of the Justice envisages changes in the activity of several institutions. At the Supreme Court of Justice, for example, it is proposed that the number of judges be reduced from 33 to 17. Instead, at the Superior Council of Magistracy there will be three more members. Two of them will be appointed by the Government and one by the Presidency.

And the number of members of the Superior Council of Prosecutors is going to increase with two more representatives, one appointed by the Government and another by the civil society. The Ministry of Justice also wants the Anti-Corruption Prosecutor's Office to deal only with resonant causes, especially those related to political corruption, and part of the institution's competences is the responsibility of the National Anti-Corruption Center.

According to PM Maia Sandu, the most important provision of the reform lies in the position of Attorney General. More specifically, it will be chosen by a commission set up by the Ministry of Justice, of which a psychologist will also be part.

President Igor Dodon explained why the PSRM does not agree with the Government's proposal and wants the Parliament and the Presidency to participate in the process of selecting the Attorney General.

Moreover, it is proposed to exclude the obligation of at least five years of experience in the prosecutor's office for those who claim the chair of the Attorney General.

The reform of the Justice is going to be subject to public consultations, and in the autumn session of the Parliament it will arrive on the table of the deputies.

The deputy PM Andrei Nastase also participated in the presentation of the justice reform concept, although his name was not included in the press announcement.