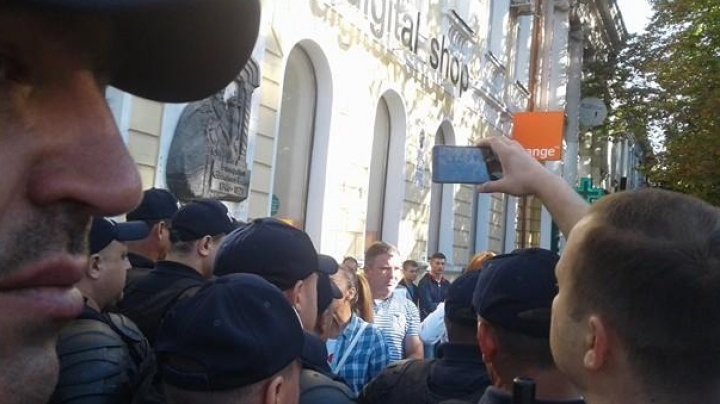 Altercations in the center of Chisinau on Independence Day. A group of activists of the “Dignity and Truth” Platform Party of fugitives Topa together with representatives of pro-Russian party of Renato Usatai tried to enter the perimeter of the National Assembly Square, where are conducted the events dedicated to 25 years of independence,  and to protest.

In order to stop the aggressive persons, the police had to use tear gas.

The activists of DA Party, owned by Topa fugitives, and those from the party of Renato Usatai tried to defile the National Army. They whistled and yelled uncensored words while the Moldovan militaries paraded in the National Assembly Square.

The authorities have labeled this gesture as electoral actions.

“All have the right to protest and a position. But I cannot understand how someone can protest when the national hymn is played. When there are honors and very important symbols of some statehoods. When you stay and look at the monument of Stephen the Great who fought for this country to exist. And from the other side to blame all that it is saint. Maybe these people do not have values. And maybe these parties who are behind – do not deserve to exist in Moldova. And the citizens should not give their vote, nor any attention. And these parties will surely disappear, like others who wanted to hurt Moldova have disappeared” said the parliament speaker, Andrian Candu

“Independence Day is not about hate and disunion. It is not about small interests. From my point of view it is a sin to step on the important values for a state in order to make electoral campaign to accumulate electoral dividends. Today should be a positive day” said the prime minister Pavel Filip. PUBLIKA.MD mentions that over 5,000 policemen will be mobilized today, to ensure the public order on Independence Day.