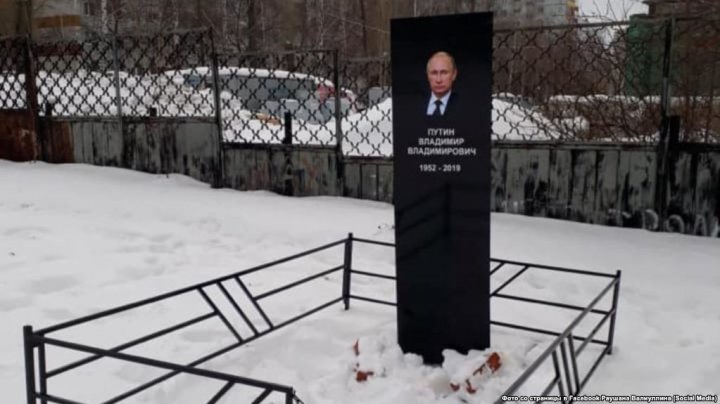 A Russian court has sentenced two activists for putting up a mock gravestone for President Vladimir Putin.

Yamadayev was arrested on March 10 after the activists installed what looked like a granite slab bearing Putin's photo, full name, and the dates 1952-2019 in front of the main investigative agency's offices in Naberezhnye Chelny, a city in the Republic of Tatarstan.

On March 12, Yamadayev was found guilty of a repeat violation of the law on public gatherings and sentenced to 28 days in jail, his lawyer Ruzil Mingalimov told RFE/RL, adding that the court's ruling will be appealed. The alleged offense was a repeat because Yamadayev, 37, was jailed for eight days in January for an installation devoted to political prisoners and journalists killed for their activities in Russia.

The Naberezhnye Chelny city court told RFE/RL hours later that Peresedov, who was detained on March 11 and tried separately, was found guilty of holding a public event without the authorities' permission, and sentenced to six days in jail.

Like plots at many real Russian graves, the marker was surrounded by a low metal barrier.

The mock gravestone installation was supported by activists with a campaign called Bessrochka, a name that could suggest both endless protest or endless time in power -- a reference to two decades of dominance by Putin, who has been president or prime minister since 1999 and started a new six-year term in May 2018.

The mock grave was installed as protests were held in several cities across Russia against legislation that critics contend is part of a Kremlin effort to reduce Internet freedom and stifle dissent.