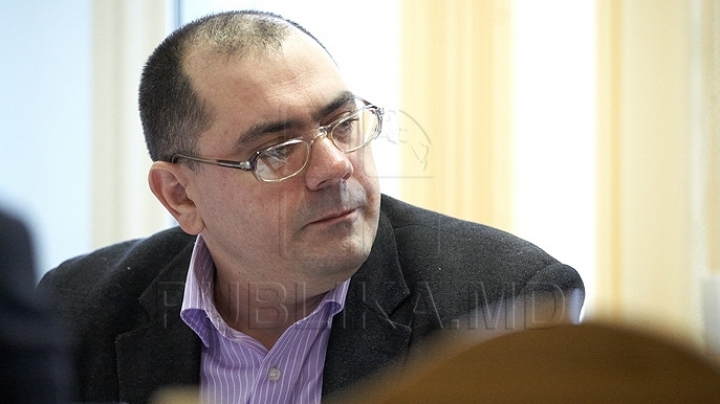 After throwing eggs and stones in police and in those who marched at the parade on Independence Day, the representatives of DA Platform of convicts Topa and of the pro-Russian party of Renato Usatai are accusing the police of illegally using the force.

The minister of Internal Affairs, Alexandru Jizdan, declares that the protesters had the objective to provoke violence during the military parade, and the police took extended security measures to protect the citizens.

The activist Alexandru Petkov was filmed when he threw an unknown object in the policemen. Petkov admits his action.

"I threw hygienic paper. You can see that clearly. I only had the car keys with me, that’s all" said the protester Alexandru Petkov.

The member of DA Platform of Topa fugitives, Nicolae Jossan was filmed when he was pushing the policemen.

Moreover, DA representatives went to National Assembly Square, where a group of children were to perform. The parents had to protect their children.

During a press conference which took place in front of the Ministry of Internal Affairs, the representatives of parties of Usatai and fugitives Topa accused the police.

At the event was also present the minister of Internal Affairs, Alexandru Jizdan, who explained that the police ensured the security of participants to parade without breaking the legislation.

"Police does not have prohibited gases in its possession, there are special means mentioned by the legislation in force. Of course now they can say anything. There are no special means used only by Moldova" has declared the Minister of Internal Affairs, Alexandru Jizdan.

The representatives of Emergency Hospital declared that on 27 august, the doctors had 9 requests in the National Assembly Square, but none of the victims suffered from the tear gas.

The Minister of internal Affairs declared that in the center of Chisinau have mobilized hundreds of policemen, because the police had operative information that the demonstrators intended to break the parade.

The festivities planned for Independence Day were shadowed by the activists of Dignity and Truth Party, financed by Topa convicts. These, together with the followers of Renato Usatai had some altercations with the policemen, who blocked their access in the National Assembly Square for an unauthorized protest.